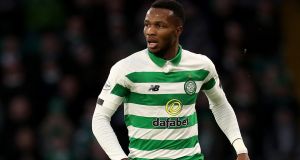 . Scottish football’s return to action following the coronavirus shutdown has been thrown further into disarray after it emerged Celtic defender Boli Bolingoli took a secret trip to Spain and failed to self-isolate on his return. File photograph: PA

Nicola Sturgeon, Scotland’s first minister, has warned Scottish football matches could be shut down after she condemned Celtic and Aberdeen players for breaching coronavirus safety rules.

The first minister said the Celtic defender Boli Bolingoli was guilty of a “flagrant breach” of the UK’s quarantine rules after he flew to Spain. He returned to his club within 24 hours without self-isolating, and then played on Sunday against Kilmarnock. Last week, eight Aberdeen players broke the sports lockdown rules by visiting a bar together; two of those have since been diagnosed with Covid-19.

Sturgeon said she believed Celtic and Aberdeen’s next matches would be called off: “Some football players seem incapable of living up to their responsibilities. I very much regret that. This is just not acceptable. Every day I stand here asking members of the public to make huge sacrifices in how they live their lives and the vast majority are doing that, and it’s not easy. We can’t have privileged football players just decide they’re not going to bother. So this can’t go on.”

She added: “Let me put this as clearly as I can in language that the football world will understand: consider today to be the yellow card. The next time it will be the red card, because you will leave us with absolutely no choice.”

Sturgeon said she did not want football fans and those clubs who were living up to their responsibilities to “pay the price” of those teams who were ignoring them. She said there had to be very clear penalties imposed by the game on players who broke the rules. “I don’t want the season to be in jeopardy,” she said. “I don’t want people who are not responsible for this to pay the price but we have to be very clear: this situation is not acceptable.”

Sturgeon said Jason Leitch, the Scottish government’s national clinical director, and Joe Fitzpatrick, the Scottish sports minister, had held two long phone calls with the footballing authorities on Tuesday to discuss “how they were going to put their house in order”.

She added more details would emerge later on Tuesday: “I think as a minimum you should not be expecting to see Aberdeen or Celtic play over the course of the coming week.”

Sturgeon disclosed that news of Bolingoli’s quarantine breach had emerged on Monday during a meeting between Leitch and the managers and captains of Scottish Premiership clubs, organised to underline the Scottish government’s anxieties about last week’s Aberdeen breaches.

Leitch said the Aberdeen and Celtic breaches raised serious questions about allowing the sport to set up “bubbles” which allowed players and staff to remain in much closer proximity than other workplaces. He said he was furious at the Celtic and Aberdeen breaches, since he and Fitzpatrick had worked very hard to persuade Sturgeon the distancing and safety protocols used by clubs justified restarting competitive matches.

“They put at risk principally the health of the population [and] they put at risk the return of elite sport; not just their own sport but golf, horse racing, rugby, swimming, everything else,” Leitch said. “We’ve designed a bubble system because they are privileged. They’re getting to do extra things that the rest of the population aren’t and they have put that at risk.”

Bolingoli said he wanted to apologise to his manager, teammates, supporters, “and so many others for letting them down so badly”. He added: “I am guilty of a major error of judgment. I know what I did was wrong and I know that I must now deal with the consequences.”

A strong statement from Celtic added: “[This] club unreservedly condemns and apologises for the behaviour of the player Boli Bolingoli in travelling to Spain without informing the club and in failing to observe quarantine restrictions. It is difficult to imagine a more irresponsible action in current circumstances and we find it beyond explanation. The club will take immediate action through our own disciplinary procedures.”

“Celtic are in touch with every SPFL club today, and with all relevant authorities, to apologise for the fact that one of our employees has created so much additional difficulty through his actions. All of our playing and backroom staff have been tested twice for Covid-19 since this incident and all, including the player in question, have tested negative. While this comes as a relief to all concerned, it in no way diminishes the seriousness or stupidity of the player’s actions.” – Guardian

1 Trump in the rough over playing golf and US Covid-19 fatalities
2 Two in custody in Tour de France doping investigation
3 Live TV coverage of all Premier League games likely to continue into October
4 The Offload: Saracens prove Pro14 is not fit for purpose
5 Awarding of 2023 Rugby World Cup to France part of Laporte investigation
Real news has value SUBSCRIBE
Crossword Get access to over 6,000 interactive crosswords