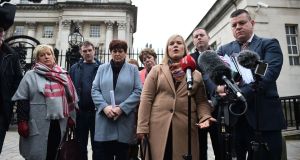 Mr Justice Bernard McCloskey rejected an application to recuse himself on the basis that he held a “subconscious bias” due to his involvement, when he was a lawyer, in a similar case relating to a previous police ombudsman Baroness Nuala O’Loan.

While he described elements of the “bias” application as “flimsy, artificial and entirely unpersuasive” he nonetheless said he would step aside from the case to avoid any concerns the relatives had about the case.

The judge made his decision less than three weeks after journalist John Ware in The Irish Times referred to how in 2002 the judge when he was a QC represented former RUC assistant chief constable Raymond White.

In 2002 Mr White challenged Baroness O’Loan’s highly critical report into how the RUC investigated the 1998 Omagh bombing in which 29 people were killed, including a woman heavily pregnant with twin girls.

Mr White and another former senior police officer, Thomas Hawthorne, are now challenging the current ombudsman Dr Michael Maguire’s finding that there was police “collusion” relating to the UVF attack on the Heights Bar in Loughinisland in which six Catholics were killed.

They were gunned down as they were watching the Ireland versus Italy World Cup game on television in June 1994.

Dr Maguire and the Loughinisland families asked the judge to recuse himself on the basis of the potential perception of subconscious bias.

Emma Rogan, whose father Adrian was killed at Loughinisland, said she respected and welcomed Mr Justice McCloskey’s decision to voluntarily recuse himself. She said she was also delighted that, pending the resumed case under a new judge, the ombudsman’s findings of collusion still stood in their entirety.

“We welcome a new judge taking fresh eyes and looking at our case again,” she said. “I will be here fighting for truth and justice until I have no fight left in me,” she added.

Sinn Féin MP Chris Hazzard said Mr Justice McCloskey had made the right decision. “Sinn Féin will continue to stand with the families in their decades long campaign for truth and justice,” he added.

SDLP Assembly member Dolores Kelly also welcoming the decision and said, “It is no criticism of his professionalism or position to suggest that there would be perceived bias in any determination. The interests of justice and the confidence of the Loughinisland families must be paramount here.”

However, Ulster Unionist Party MLA Doug Beattie said the judge’s decision to step aside “even though the legal test has not been satisfied raises serious questions for the administration of justice in Northern Ireland”.

Traditional Unionist Voice leader Jim Allister said the judge’s decision was “troubling, both in itself and in the precedent it could set for the law being seen to succumb to unwarranted orchestrated demands”.

He said Mr Justice McCloskey’s “generous decision to step aside is all the more remarkable considering the extent of excoriation justifiably heaped on the recusal application belatedly put forward on behalf of the ombudsman”.

And he added: “The fact that the question of recusal only arose once it was clear the ombudsman had lost the case is a telling commentary in itself. The ombudsman’s office emerges from this saga diminished on every front and if ever there was a public official who should be considering his position it is Dr Maguire.”