Eoghan Murphy: Co-living comparison to ‘boutique hotel’ not a ‘good one’

Minister criticised by Opposition for comments made when defending developments 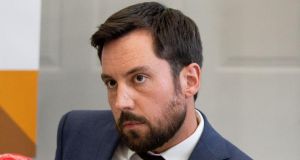 Minister for Housing Eoghan Murphy: ‘Co-living elicits outrage in some because they wrongly assume it’s what we propose a response to families in crisis. It is not.’ Photograph: Tom Honan/The Irish Times.

Minister for Housing Eoghan Murphy has said a comparison he made between co-living spaces and a “very trendy, kind of boutique hotel type place” was not a “good one”.

Mr Murphy was criticised by the Opposition for the comments he made defending the co-living developments, which see occupants have their own bedrooms but share some facilities.

The Dublin Bay South TD said co-living is aimed at graduates or young professionals and, speaking on Newstalk Breakfast, denied they are akin to prisons.

“No, not at all, it’s more like a very trendy, kind of boutique hotel type place,” Mr Murphy said.

“It’s something I’d seen abroad in other cities, where you have your own private room, en suite, but you also have shared community spaces, a gym, a movie room, a games room potentially, a kitchen, a living room.

“I can see people coming here to Ireland who can’t sign a twelve month lease because they’re not going to be here for twelve months maybe, who don’t want to share a place with three strangers, and who want to have a bit of privacy, but also a bit of that communal or social aspect to living.

He later issued a statement in which he said he was asked if co-living spaces are “like prisons”.

“Based on what I have seen in other cities they are not. My analogy in response wasn’t a good one. But co-living elicits outrage in some because they wrongly assume it’s what we propose a response to families in crisis. It is not.

“Our response to the housing crisis is to build over 20,000 new homes – houses and apartments – this year. None of them co-living spaces. Our response next year is to build even more homes.

“Homes are the answer for the vast, vast majority co-living is targeted at approximately one per cent of renters.”

Fianna Fáil housing spokesman Darragh O’Brien said Mr Murphy is “is so unbelievably out of touch he now believes his own PR spin”.

“Co-living cannot be the highpoint of the State’s ambitions in housing. Under FG the delivery of basic housing services has failed miserably.”

Sinn Féin’s David Cullinane said co-living is not “trendy” or “cool”, while Richard Boyd Barrett of People Before Profit said Mr Murphy “is living on another planet and simply does not understand the housing crisis”.