Congregation of 300, including close relatives, friends and colleagues of the air crew, attend ceremony 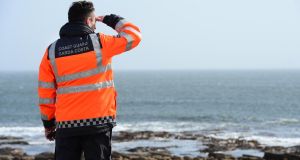 A year after Rescue 116 air crew Capt Dara Fitzpatrick, Capt Mark Duffy, Paul Ormsby and Ciarán Smith died off Blackrock island, their “lives of service and duty” and that of Irish Coast Guard Doolin volunteer Caitriona Lucas were remembered at a series of events on land and sea.

The commemoration began in darkness and driving rain on a windy hill above Blacksod late on Tuesday when relatives of the four air crew and over 100 people from the community and beyond marked the first anniversary with a candle- lit vigil.

As four minutes of silence were held from 12.45am — the time that the helicopter lost contact a year ago — four LED lights between Cnoc Tearmainn and Glosh shone like beacons through the worst of the elements.

The south-easterly gale had not eased by Wednesday morning, when a Mass was held in St Brendan’s Church, Tirrane, just several miles from Blacksod lighthouse – nucleus of an intensive air/sea and sub-sea search after the helicopter crash for 42 days.

Death “can come like a thief in the night … and so it did on March 14th last year,” Kilmore Erris co-pastor Fr Kevin Hegarty told the congregation of 300, including close relatives, friends and colleagues of the air crew.

“The archive of the [Mullet] peninsula is sometimes drenched in tears, and another sad chapter in that archive had been added” that day, Fr Hegarty said.

The sea is a “source of sustenance and sorrow”, Fr Hegarty said, and four lighthouses in the area testify to its “majesty and terror”, as did many losses, including the first world war sinking of the SS Tuskar steamer, and the loss of ten fisherman from the Inishkeas in a storm 90 years ago.

Fr Hegarty recalled the words of Maria in JM Synge’s Riders to the Sea after the death of her last son, when she said that “there isn’t any more the sea can do to me”.

‘Engraved on our hearts’

He noted that it took a tragedy to reveal the strength of community, even though there were fears in Ireland that we had lost this sense of community with the rise of individualism.

“There is no easy way to get through grief ... grief is the price we pay for love” he said, and the acute grief experienced must be especially so for the families of Paul Ormsby and Ciarán Smith, still missing.

While Blacksod and Blackrock lighthouses would be engraved on the hearts of the bereaved, “we would like you to know you will always be engraved on our hearts,” he told the families.

At Blacksod helipad, after the Mass, community representative John Gallagher thanked people all over Ireland, and many children in particular, for their response. Peter O’Hagan of CHC Ireland, employer of the four air crew, paid tribute to all those involved in the search and support efforts.

Wreaths were placed on the helipad by Capt Fitzpatrick’s mother, Mary, and sister Orla; by Capt Duffy’s two children, Esme and Fionn; by Jennifer Keating for Paul Ormsby; and by Martina and Shannon Smith, wife and daughter of Ciarán Smith. A fifth wreath remembered Caitriona Lucas who died during a search off Clare in September, 2016.

Accompanied by Irish Lights ship Granuaile and the RNLI Achill and Ballyglass lifeboats, the patrol ship steamed north-west to Blackrock island where the five wreaths were cast onto the constant Atlantic swell.

Just after daybreak on Wednesday morning, a wreath had also been placed off Blackrock by Killybegs fishing vessel, the Father McKee, in recognition of the role played by the rescue agencies in safety at sea.