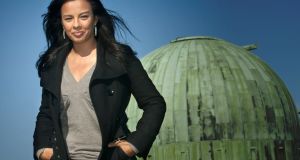 Science broadcaster Liz Bonnin whose mother died from Covid-19 has said she hopes the world will “wake up” and recognise the importance of connectedness, community and the wellbeing of the planet.

Ms Bonnin, who was born in France, grew up in Ireland and now lives in the UK, said she was “broken and there is a lot to heal” following her mother’s death over the Christmas period.

“It’s hard to put into words just how extraordinary the NHS nurses and doctors have been, how patient and kind as they led me through every detail of mum’s condition that I hung on to, how composed despite the nightmare they’ve had to endure for far too long now, how privileged we are to have the NHS,” she said in a Twitter thread on Tuesday.

“ It strikes me once again, thanks to the faceless angels I spoke to on the end of a phone, often in the dead of night, just how beautiful we humans can be - compassionate dedicated, strong, selfless, brave, honest, empathetic - traits that as a society we seem to have forgotten we are all capable of as we continue to deepen the divides between us out of fear, out there in the world.”

However, Ms Bonnin, a biologist whose wildlife show Big Blue Live won a Bafta in 2016, criticised the handling of the pandemic, saying there was a “blatant misunderstanding of what it takes to contain the virus”.

“We didn’t listen to and act on the science,” she said.

“My world crumbled as I watched her suffer the consequences of what we continue to prioritise in much of the global north at the cost of environmental and human health, in an age of blind partisanship, rampant misinformation and absurd conspiracy theories,” Ms Bonnin said.

“I dearly hope that in my lifetime we will collectively wake up and reject our addiction to monetary gain and short term political goals, and recognise the true value of connectedness, community, wellbeing, kindness and caring for our planet and each other - no matter our age.”

The TV presenter also highlighted the attitude towards older people during the fight against Covid-19.

“There was a time when we revered our elders, when it would have been unheard of to speak of older people as more dispensable than others. My mother was not a less important human. Nor was she just a statistic,” she said.

“We have it in us to be better. The NHS heroes I’ve had the honour of speaking to and sometimes of seeing briefly at the ICU doors that I couldn’t go through, who not only took care of my mum but of me too, and many thousands of others, are testament to that. We have it in us.”

Ms Bonnin studied biochemistry in Trinity College Dublin before completing a Masters in wild animal biology with the Royal Veterinary College and Zoological Society of London.

She said she would continue to get unbiased, science-based information about Covid-19 from trusted sources.