More students from Deis schools progressed to third level in 2020 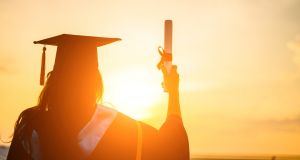 The Irish Times’ Feeder School supplement gives a school-by-school breakdown on the number of students progressing to higher-level education and shows what third-level institution they have registered with. Photograph: Getty

Deis-designated schools saw an increase in student progression to third-level education in 2020, but social class remains a significant factor in determining the level of educational attainment achieved by students in Ireland, according to figures compiled by The Irish Times.

Despite this improvement and the controversy surrounding the Leaving Cert and the introduction of the calculated grades system last year, the rate of student progression to third-level in 2020 was broadly in line with preceding trends.

A large proportion of students from Ireland’s 51 fee-paying schools, which are predominantly based in south Co Dublin, progressed on to courses in UCD and Trinity College, where they make up over 25 per cent of first-year undergraduate students, even though they represent just 7 per cent of sixth-year students nationwide.

Of the 10 schools sending the highest rate of students to high-points courses (courses at State universities, teacher training colleges and other colleges such as the Royal College of Surgeons), six were fee-paying, and four were non-fee paying.

Two of the non-fee paying schools are Irish-medium and two are English-medium schools.

Interestingly, this year’s progression charts indicate that there may have been a slight fall-off in third-level registrations of fee-paying students, with 3,252 of them securing places in high-points colleges.

This still represents an 85.5 per cent progression rate of the 3,803 fee-paying students who received calculated Grades in 2020. The corresponding overall progression figure for 2019 from graduates of those schools was 3,287, or 35 more than in 2020.

Some of this minor fall-off in numbers of fee-paying schools’ progression numbers may be attributed to students who opted to sit the Leaving Cert in November, rather than progress to college to undertake a course that was not their preferred choice.

Whereas the calculated grades process received a lot of criticism from schools and institutions who perceived themselves to have been disadvantaged by the algorithm used, the process saw a marked improvement in the progression rates of current and previous sixth-year students at Deis schools on to CAO colleges in 2020.

That achievement is not as dramatic as it may first appear, given that Deis students made up 19.3 per cent of this year’s sixth-year class group and the percentage attending fee-paying schools represented 7 per cent of the overall numbers.

The outcome of the calculated grades process has been a significant advance in progression from Deis schools. Over the past six years, Deis schools secured places at high-points colleges and courses for on average for 25-26 per cent of their students .

The 6,662 Deis students who secured places through the CAO process represent almost two-thirds of the entire sixth-year Deis cohort.

Despite the improvement, more work clearly needs to be done to attract students from disadvantaged areas to high-points colleges.

UCD registered 8.1 per cent of incoming first-year students in 2020 as having attended Deis schools. Maynooth University registered 16.5 per cent while Dundalk IT recorded 24.5 per cent registrations and IT Letterkenny allocated 46.8 per cent of its first-year undergraduate places to Deis students.

Schools where subjects are taught through Irish perform strongly again this year and take three of the top 10 places in the main progression table.

Top of the list is Coláiste Chroí Mhuire gan Smál, which is located in an Spidéal, in the Connemara Gaeltacht, while the other two schools – Coláiste Iosagáin and Coláiste Eoin – are both located in Dublin.