Dismay as HSE to end wonder drug that treats emphysema 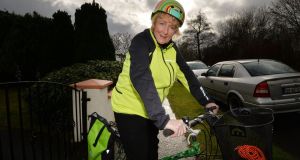 Emphysema sufferer Orla Keane has been using Respreeza, a highly-expensive wonder drug that is set to be rejected by the HSE on cost grounds. Photograph: Alan Betson

Orla Keane does not know exactly what will happen if she is forced to come off the medication she has been taking for the past decade because the manufacturer will not make it available anymore.

“No two people with my condition are the same,” she says. “I don’t know how fast I will deteriorate. My guess is that I’ll just fade away.”

The condition she has is genetic emphysema and the treatment that has kept it at bay for almost a decade is Respreeza, a highly-expensive wonder drug that is set to be rejected by the Health Service Executive on cost grounds.

The manufacturer, CSL Behring, has set the end of this month as the deadline for ending the compassionate use programme under which Keane and 20 others avail of the drug.

The company has set, and changed, previous deadlines before but this time may be different because price talks have ended without agreement.

“It’s terrible that we’re being used as pawns in a negotiation game, with these deadlines being set every month. How much are our lives worth anyway,” asks Keane. “I’m really fearful for the future.”

Keane (61) was diagnosed with alpha-1 in 1996. “It was unheard of back then. My doctor didn’t know anything about it. They thought I had asthma until the blood tests results came back.”

What followed was “the worst summer of my life. I couldn’t breathe, or walk, properly, and I got lots of serious infections – a horrible cough, choking fits, pneumonia”.

She was put on a trial for Respreeza but spent two years on a placebo before getting the actual drug. It slowed down the progression of her disease.

“The breathlessness, and the cough, disappeared. I wasn’t sick all the time; I haven’t had a virus for over a year now.”

Keane says she has worked on her health to improve her odds. She does aqua-aerobics at her local pool in Maynooth to keep fit and cycles rather than exposing herself to possible infection on the train.

Respreeza was licensed last year, but far from being the end of the story, this marked the beginning of her uncertainties. High-cost drugs have to be approved on cost-efficiency grounds before the HSE will reimburse the cost, and at €100,000 per patient, the price was more than the health service was willing to pay.

While much attention has focused on the campaign to have another high-tech drug, Orkambi, approved for cystic fibrosis patients, the plight of patients on Respreeza has attracted far less interest, perhaps because they tend to be older and are fewer in number.

As well as the 20 or so patients on the access programme, another 40 people with alpha-1 are waiting to receive it should the HSE give approval.

Keane’s sister is one of them.