Opposition politicians appeal for ‘clarity and certainty’ over exams 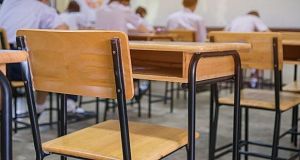 Feedback from parents suggests they want students to be given a choice of assessment for the 2021 Leaving Cert exams. File photograph: Getty

Leaving Certificate students must be offered the choice to opt for predictive grades or sit their exams in June, a national council of parents has said.

The Education and Training Board (ETB) Schools National Parents’ Association is calling on the Government to make a decision about how the process will run to provide “clarity and certainty”. The organisation, which represents 38 per cent of parents of secondary school students, is asking for a “clear choice” to be offered to students by the end of January.

All students, including those in Leaving Cert, return to online learning on Monday morning. Plans to provide three days of in-person teaching to Leaving Cert students were abandoned following mounting pressure from schools and teachers’ unions.

David O’Gorman, secretary of the ETB Schools Parents’ Association said Leaving Cert students now need “clarity and certainty” regarding their end of year assessments. Providing a clear choice by the end of the month would remove “an awful lot of the stress and anxiety” for students and their parents, he said. It would also have the added effect of “focusing every student’s mind on their work no matter what choice they’ve made”.

Minister for Education Norma Foley has said she is determined to hold traditional Leaving Cert exams in June.

Mr O’Gorman said the association came to the conclusion two Leaving Cert options must be made available based on social media commentary and appeals from parents and teachers.

“The feedback from parents is that choices should be given to take the pressure off,” he said.

“Students shouldn’t be expected to sit a normal exam when nothing about this year has been normal,” it says.

The Labour Party is calling for a decision to be made by early February.

“We need clarity,” said the party’s education spokesman Aodhán Ó Ríordáin. “One option is to give students a choice of calculated grades or the Leaving Cert. Either way, students need to know what is being planned.”

Sinn Féin’s education spokesman Donnchadh Ó Laoighaire is calling for a “Plan B” to be delivered as soon as possible.

“We cannot allow a situation where we are going well into the spring without certainty… If the Leaving Cert was to be cancelled, what would happen?” he asked.