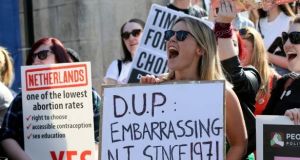 Northern Ireland’s human rights commission (NIHRC) has launched a landmark legal action against the UK government for its failure to commission safe and accessible abortion services more than a year after abortion was made legal in the country .

Northern Ireland secretary, Brandon Lewis, is accused of unlawfully denying the rights of women in the country, who experts warn are being forced to use unregulated services and to travel to high-risk areas during the pandemic, the Guardian reports. The NIHRC is also taking action against the Northern Ireland Executive and the country’s Department of Health.

The situation for women seeking an abortion could considerably worsen in 2021, as medics who formed an ad-hoc early abortion service in the early days of the pandemic have warned the unfunded service is on the brink of collapse, as the small number of health professionals running it return to their pre-pandemic roles.

One of Northern Ireland’s five trusts, the South Eastern trust, currently has no early medical abortion (EMA) service after a doctor went on maternity leave. Another, the Northern trust, ceased all services in October because of a lack of resources but resumed on 4 January. While it was closed other trusts were not taking referrals because of a lack of capacity - leaving women with no choice but to travel for an abortion or order abortion pills online and take them unsupervised.

Les Allamby, the head of the NIHRC, said the body was taking legal action after the secretary of state, the Northern Ireland Executive and the Department of Health refused to take responsibility for creating services.

“We have entered a Kafkaesque world where the NIO [Northern Ireland Office] claims it is taking all reasonable steps to enable a service, the Department of Health claims it cannot get agreement to commission and fund a service through the NI Executive and the NI Executive says it is a matter for the Department of Health,” he said. “It is a game of ‘pass the parcel’ where the music never stops, except it is not a game but an issue of women’s health and wellbeing. In addition, forcing women to travel raises wider public health issues.”

Abortion was legalised in Northern Ireland last October after a Westminster vote led by the Labour MP Stella Creasy took advantage of a paralysed Stormont, despite an 11th-hour attempt by the region’s assembly to block change. Officials confirmed termination could go ahead in April after the threat of legal action by pro-choice campaigners.

But the Northern Irish health minister, Robin Swann, has said commissioning services is a “controversial issue” and must be referred to the country’s executive committee.

Ms Creasy, whose amendment paved the way for the change in the law, said the blame for the fact that women were still being forced to travel to England to access abortion or order abortion pills online lay “squarely with the secretary of state”, who earlier this month said he was “proud” the UK government had delivered the right to abortion.

“Those whose rights are being denied are rightly asking why Brandon Lewis won’t accept a hard border in the Irish Sea when it comes to goods and services but he will with women’s rights,” she said.

As a result of the deadlock trusts have established unfunded services led by a group of fewer than a dozen committed medics, the Guardian understands. Between April and the end of November 2020 they facilitated 719 terminations, compared with only eight the year earlier, according to DoH figures.

Dr Laura McLaughlin, a consultant obstetrician and gynaecologist from Doctors for Choice NI who works with just one nurse to provide the service in her trust, said the system was unsustainable. Since going on maternity leave she has not been replaced. “The fact we have a service at all is 100 per cent down to clinicians’ hard work, sheer commitment, dedication, and desire to help women,” she said. “We feel very isolated, exhausted and ultimately really disappointed.”

Another clinician single-handedly providing the service in a different trust had taken two days of annual leave since the pandemic began so the service would not grind to a halt.

“Women’s healthcare should not be dependent on their location or ability to board a plane,” said Ruairi Rowan, the director of advocacy and policy at Informing Choices NI (ICNI), which directs all calls from women wanting an abortion to relevant services. “Travel carries stigma. It adds to secrecy and it can take away privacy.”

Abortion is legal in Northern Ireland up to 12 weeks (compared with 24 weeks in England) but four of the five trusts are only providing abortion pills up to 10 weeks, and none between 10 and 12 weeks. Abortion up to 24 weeks is legal if a woman’s mental or physical health is at risk, and up to term if there is threat to life, but currently no surgical abortions are taking place.

The women most likely to need later abortions are the most vulnerable, young women or those in abusive relationships for whom travelling may be impossible, said Goretti Horgan, a social policy lecturer at Ulster University and a longtime pro-choice activist.

“Women here no longer have to fear being criminalised, and that is a huge advance,” she said. “But for women who are watched all the time, who are under coercive control - they have very little choice.”

A UK government spokesperson said the health and safety of women accessing abortion remained “paramount”. The government would continue to engage with Northern Ireland’s DoH in commissioning “full abortion services, consistent with the regulations we made, as soon as possible”, they added.

A spokesperson for the DoH said it had “advised that [it] is not required to commission the relevant services”. Asked by the Guardian if there were plans to commission services in 2021, the department said any matter that was “significant or controversial” had to be put before the executive and as proposals remained under consideration it was “not possible at present to give a timescale for the introduction of a fully commissioned abortion service”. – Guardian