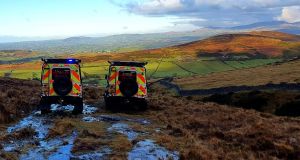 Rescue team responding to a call out from a party of walkers in distress on Slieve Meelmore. Photograph: Mourne Mountain Rescue Team/Facebook

Mountain rescue teams are under enormous pressure responding to “needless” callouts during this period of cold weather.

Mountain Rescue Ireland has criticised people who put themselves and voluntary mountain rescue personnel in danger by climbing mountains in bad weather.

“Some teams have been put under enormous pressure with the quantity of callouts that have occurred. It is not just the cold snap, it’s the revised Covid-19 lockdown restrictions also,” the organisation said in a statement

“Some of these callouts are absolutely needless … Heading out on a mountain trek in bad weather, going ill-equipped and untrained [...]is not a wise decision to make,” it added.

Mountain Rescue Ireland responded to 345 incidents in 2020, a slight increase on the previous 12 months when there were 330 callouts. Of the incidents attended, 28 per cent were during the night, while a quarter required the deployment of a helicopter. The teams were tasked with rescuing 65 people who were lost, 59 who were reported missing, 132 with minor injuries, and 50 with serious injuries. Mountain Rescue Ireland also responded to 25 incidents where a person lost his or her life.

The organisation points to a connection between a peak in rescue calls and changes to public health restrictions. Calls dropped between April and June, when the country was predominantly in a strict lockdown, with just 57 callouts compared with 95 during the same period in 2019. The teams responded to 137 calls from July to September, an increase of 20 on the same period the year before.

The largest year-on-year increase occurred in the colder months, from October to December, when callouts jumped by 58 per cent. There were 90 callouts over the period in 2020, compared with 57 during the same months in 2019.

Mountain Rescue Ireland is urging walkers to adhere to public health guidelines and to ensure they are prepared before climbing a mountain. It advises people to check the weather, ensure they have the right equipment, and be sure their knowledge and skills are suited to their mountain route.