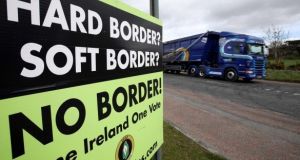 Lord Paul Bew said: “A new, modern case for the union must be developed, based on the principle of consent.” Photograph: Paul Faith/AFP/Getty Images

The new British prime minister must make the case for the United Kingdom with a positive vision to counter the nationalist narrative, a prominent historian has suggested.

Lord Paul Bew, who teaches Irish history and politics at Queen’s University Belfast (QUB), said Theresa May’s successor must make the case for the union consistently and also highlight what he described as the “intellectual weakness” of the case for a united Ireland.

5 I got rid of 95% of my stuff, almost everything I’ve ever owned

8 Covid-19: How to look after yourself if you catch the virus

11 Coronavirus: More than 100,000 have contracted virus in North

14 More than half in North want vote on a united Ireland, poll finds

15 Emma de Souza: My generation deserves to have its say on Irish unity now

19 Sweden to close border with Norway after Oslo locks down

21 Kremlin accuses US of backing anti-Putin rallies across Russia

24 Chris Johns: If this is to be the last lockdown it must work

26 Oscar Wilde, my grandfather, ‘talked himself into prison’

27 Garda trauma: Sean was a garda for six weeks when he saw his first body

29 Badge of distinction: Meet the first Sikh in the Garda Reserves

31 A Kerala Kitchen curry for the weekend

38 Teaching was Jerry Kiernan’s vocation; in 30 years he never missed a day