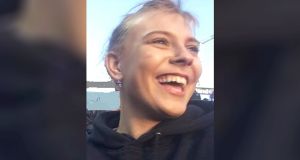 Evidence of pornography on the phones of one of the accused - Boy A - was excluded from the jury.

The 14-year-old accused, who can only be identified as Boy A due to his age, also had thousands of images of pornography in his phone, some of which depicted sexual violence.

The evidence emerged during legal argument in the seven week trial which ended on Tuesday with the two boys convicted on all charges.

The prosecution sought to put evidence of the internet searches and the violent pornography before the jury as part of their case against Boy A, who was also convicted of violently sexually assaulting Ana.

Gardaí told the court, in the absence of the jury, an examination of two phones found in the bedroom of Boy A revealed over 12,000 images, the vast majority of which were of a pornographic nature.

The prosecution said it was seeking to have about ten images admitted into evidence including one of a man in a balaclava looking at a semi-naked woman. Another image showed a man choke a woman as another man watched.

The phone’s hard drive showed pornographic videos had been accessed online including one with a title referring to a pornographic actor called Anastasia. Another referred to “Russian Teens”.

The violent pornographic material could be relevant to the boy’s attitude towards consent, prosecuting counsel Brendan Grehan SC said. “It is general background evidence, that’s as far as we go with it. It is potentially relevant in that regard.”

Defence counsel Patrick Gageby SC said the probative value of the pornography evidence “is so slight as to be imperceptible” while its “prejudicial value is extremely high.”

If the prosecution wanted to introduce the violent images, they might have to put them in context by introducing the thousands of other non-violent images, he said.

It was also inadmissible because of the large time gap; six months, between the material being last accessed and the murder, Mr Gageby submitted.

Mr Gageby also objected to photographs showing a mannequin dressed in the outfit allegedly worn by Boy A during the murder, including items from his so-called “murder kit.”

In preparation for the trial Forensic Science Ireland blood analysis expert John Hoade had dressed a mannequin in the boy’s clothes and the items found in his backpack, which became known as the murder-kit.

The items included a homemade skull-like mask, a snood scarf, shin-guards, knee-pads and gloves, some of which had Ana’s blood on them.

Mr Grehan said the photos of the mannequin were a “visual aid” to show the jury how items from the backpack were intended to be worn. He said the mannequin was “no more than a representation of what the jury has already seen, in a different format.”

Mr Justice McDermott ruled the mannequin photographs would not be admitted, stating “whatever limited probative value is outweighed by the disproportionate prejudicial effects.”

He also ruled out a video found on Boy A’s phone which appeared to show his co-accused Boy B hitting a stone block with a stick re-enforced with steel bars.

“I don’t see any relevance other than attempting to draw an inference which could not be justified,” the judge ruled.

He made the same ruling regarding evidence of internet searches by Boy B for various types of knives and for a YouTube video entitled: “My Girlfriend Tortured, Stabbed and Starved Me.”

Other items ruled out included a copybook containing drawings by Boy A, including one of an emaciated figure with bandaged skull for a head.

The words “just kill them” and “just f**king do it” were also written in the book. This showed an interest in violent imagery, the prosecution said.

The prosecution also sought to introduce a questionnaire signed by Boy A which appeared to form a part of a school assignment. Among the questions and answers were:

-Where do you like to hang out? Abandoned places.

-What are your favourite books? Horror.

-I feel: Not much

Mr Gageby called them: “juvenile jottings of a juvenile written in a juvenile fashion as part of some class of a school questionnaire.”

He continued: “The fact he feels himself strange or doesn’t feel much is likely to be taken out of context and in some way demonstrate that it is more likely that the author of this planned and killed a young girl. In my opinion it just isn’t there.”

The judge ruled out every part of the questionnaire except for the reference to hanging out in abandoned places.

Where do you like to hang out? Abandoned places.

What are your favourite books? Horror.

What are your favourite sports? Combat.

What are your favourite movies? Horror and comedy.

What is your favourite music? Rap and heavy metal.

I would describe myself as: Crazy, funny, adventurous,

I feel: Not much

I hope to: Do well in life

I feel: Angry when someone tries to annoy me or hits me

I love: Steak and drawing.