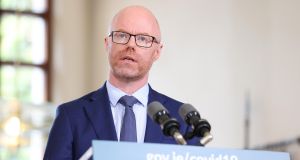 Stephen Donnelly: “The combination of winter and what Covid has done to our healthcare system means that this winter will probably be the most challenging time in healthcare in living memory.” Photograph: Julien Behal/PA

The launch of the Government’s new €600 million winter plan for the health service has been delayed.

The plan was to have been launched on Thursday. However, it is now expected to be published next week. The winter plan aims to increase capacity in hospitals and in the community to boost services against the backdrop of the Covid-19 pandemic.

The Health Service Executive (HSE) said on Wednesday that elements of the new plan on how health services would be delivered in the months ahead “remained to be finalised”.

Health service sources said on Wednesday that one of the issues outstanding was how the €600 million budget set out in the plan would be divided between the final quarter of 2020 and the early part of 2021.

Initially, it had been envisaged that €200 million would be allocated up to Christmas with the balance of €400 million earmarked for the first few months of next year.

Minister for Health Stephen Donnelly, who reported feeling unwell on Tuesday but received a negative result when he took a Covid-19 test, participated in a teleconference on the winter plan with senior health service officials on Wednesday.

Sources said that final drafts of the winter plan were still being circulated among senior health service figures on Wednesday.

A key part of the plan will be an expanded flu vaccination initiative which Government sources suggested could cost €64 million.

The HSE has placed orders for approximately 1.35 million doses of flu vaccine for adults and 600,000 doses for children aged between two and 12 years.

The new winter plan will also involve the introduction of about 1,000 additional acute and sub-acute beds. It is expected about half of these will be in acute hospitals. There will also be new rehabilitation beds and investment in intensive care facilities.

The plan envisages that there will be a workforce of about 3,000 people involved in testing for Covid-19 in future, as well as contact tracing. Recruitment for some of these positions has already commenced as staff who are currently in this role on secondment will ultimately be redeployed.

The plan will see GPs having access to diagnostic services for their patients in the community, in order to keep the the patients out of hospitals as much as possible.

There will also be new community assessment hubs which will aim to deal with patients, particularly those with chronic conditions, without them having to be admitted to hospitals.

The Oireachtas committee on Covid-19 was told by the Department of Health on Wednesday that there were 4,550 people in July waiting for home support services.

The new winter plan will also call for work practice flexibility on the part of health service staff to be “maximised”.

Mr Donnelly said earlier this week the challenges the health service would face this winter would be unprecedented.

“The combination of winter and what Covid has done to our healthcare system means that this winter will probably be the most challenging time in healthcare in living memory,” he said.

1 More than 30 people queue overnight to secure property in Carlow
2 Coronavirus: Further 430 cases reported in State is most in a day since April
3 Trump paid no federal income taxes in 10 of past 15 years – report
4 Hello Eir, is anybody there? Four unhappy customers complain
5 'Totally fake': Donald Trump rubbishes NYT report on his tax returns
Real news has value SUBSCRIBE