Record rechecks follow controversy over extent to which some results downgraded 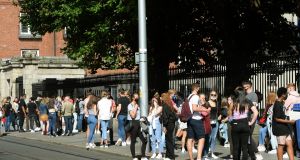 A record 12,000-plus Leaving Cert students have sought rechecks of their calculated grade results.

The surge in appeals follows controversy over the extent to which some students’ results were downgraded, especially in high-achieving schools.

Students had until 5pm on Wednesday to lodge an appeal online over the grades they received last week.

A Department of Education spokesman confirmed that 12,292 students - or one in five Leaving Cert candidates - had lodged an appeal in respect of 33,677 grades.

The appeal process for students is free but limited to finding errors in the “transmission and processing of student data”.

It will not involve reopening teachers’ decision-making processes which resulted in their estimated grades.

Teachers were advised to “securely destroy” any supporting documentation they generated in reaching a decision on students’ grades.

This included drafts of forms, personal notes or emails in which teachers discussed a student’s estimated percentage mark or class ranking in a particular subject.

It is understood this was a condition made by teachers’ unions in signing up to agree to the calculated grades process, along with a full indemnity in the event of any legal action.

Schools were directed to retain only the final official forms used to record students’ grades and class rankings.

Stages one and two of the appeal process will ensure the collection and processing of student data was done without error.

Students unhappy with that outcome can avail of a separate review by independent “appeals scrutineers”.

This third stage will again assess the procedures with access to documentation considered at the initial stages. Final complaints can be brought to the Ombudsman.

Students who want to find out their class rankings as estimated by their teachers, meanwhile, have to file a data access request which can take up to a month to process.

Until now the Department of Education has declined to comment on how students may access this data except to say that it has been taking “legal advice” on the matter.

However, the Data Protection Commission has confirmed that students are entitled to have this information if they submit a “subject access request” to the department.

Deputy commissioner Graham Doyle said: “We understand that the department will give effect to individuals right to access of their personal data on request”.

Students had been due to have access this data last Monday. However, the department reversed its position following lobbying from teachers’ unions who warned the data was highly sensitive.

The first of several potential High Court challenges against the system used to calculate Leaving Cert results, meanwhile, has come before the High Court.

The action against the State has been brought by Aine Finnegan, from Fairview, Dublin 3, who missed out on a place to study medicine at Trinity College Dublin by two points after three of her calculated grades were reduced.

Her application came before Mr Justice Charles Meenan on Wednesday, who was told that several other potential similar challenges to the calculated grades system are pending.

The court heard that the student studied for her Leaving Cert at the Institute of Education in Dublin. She studied there so she could obtain the required points to allow her fulfil her dream of studying medicine and becoming a doctor. The case has been adjourned until next week.

The volume of appeals this year, meanwhile, represent a 35 per cent increase over last year when just over 9,000 students – or 16 per cent of all candidates – appealed some 17,000 Leaving Cert grades this year.

Last year’s numbers were the highest on record at that time and were attributed to moves to provide greater transparency.

Students were permitted to view and appeal exam papers online for the first time.

In addition, candidates were provided with marks they achieved for individual components in subjects, such as oral exams, at an earlier stage