New exhibition focuses on Glendalough as a place of isolation 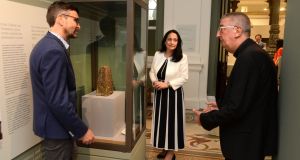 From left: the curator of Glendalough: Power, Prayer and Pilgrimage Matthew Seaver. with Minister for Culture Catherine Martin and Archbishop of Dublin and Primate of Ireland Diarmuid Martin. Photograph: Dara Mac Dónaill

A bronze coated iron hand-bell found at a site near Glendalough in Co Wicklow will be on display for the first time as part of a new exhibition at the National Museum of Ireland (NMI) in Kildare Street, Dublin.

Ireland’s most famous monastic site will be the subject of the exhibition entitled Glendalough: Power, Prayer and Pilgrimage, featuring 24 objects spanning a period of 1,200 years. All the objects are being exhibited for the first time.

It is intended to highlight a place where social distancing and isolation were a fact of life 1,400 years before the terms came to the fore as a result of Covid-19. This is the first exhibition at the library since it reopened to the public in July.

NMI director Lynn Scarff said she hoped it would “shine a light on a very special place in Ireland”.

Many of the objects on display were discovered as part of UCD-led research archaeological excavations undertaken at Glendalough since the 1950s, with others through discoveries by members of the public or by donation.

The hand-bell dates from the 8th or 9th century and has been donated to the NMI by Archbishop of Dublin Diarmuid Martin on behalf of the diocese.

Ironworking evidence from Glendalough suggests that this bell may well have been made at the monastery.

Such bells were used to mark regular times for work and prayer, but also for banishing evil and cursing people.

Also featuring in the exhibition is a tiny cross made of jet, a black organic rock similar to coal, which may have been made in the northeast of England and carried back to Glendalough by a pilgrim. It was found in the Glendalough valley in 2017.

The exhibition includes a fragment of a porphyry tile, a stone quarried in the eastern Mediterranean, which was recovered during the excavation of one of the most remote sites in the Glendalough valley in 1958 and is thought to have been taken from a building in Rome, or from a Roman building elsewhere in Europe, and carried back to Glendalough by a cleric and used as a mark of authority.

A late 10th- or early 11th-century bell, which was suspended for rope-ringing in a belfry at St Kevin’s Church, is thought to have been imported from England or northwestern Europe. Other exhibits include a shoe from the 10th century which belonged to a pilgrim and was lost in a bog, until it was found by a passer-by and reported to the NMI over 1,000 years later; silver coins found as part of a hoard in the 1980s; decorated cloak pins and pottery; and also early railway travel posters and souvenir ceramics. Minister for Culture Catherine Martin, who opened the exhibition, said the national institutions have been a “source of solace and inspiration for us all during the last couple of months, in various ways”.