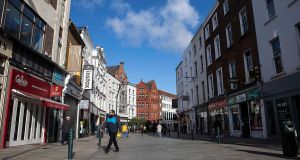 The new heightened Covid-19 restrictions will cost the State about €1 billion over the next six weeks, the secretary general of the Department of Public Expenditure and Reform has said.

Robert Watt told the Dáil Public Accounts Committee that the new restrictions would cost about €150 million per week.

He said there would also be a significant loss of revenue for the State .

Mr Watt told independent TD Verona Murphy that for this year and next, the State had to spend significant amounts of money to deal with the impact of the Covid-19 pandemic.

However, he said, “there is, of course, a limit, a ceiling and it will be determined by the cost of servicing the debt and our ability to fund it”.

“If we have a low-interest environment for the foreseeable future, well then these debts will be manageable and sustainable. If we go back to a situation where the cost of new money is 2, 3, 4 or 5 per cent, the average or norm we would have expected for a sovereign like Ireland, then the interest becomes more expensive.

“There is a ceiling. Nobody knows what it is. Of course you don’t want to find out what the ceiling is.”

Mr Watt also told the committee that the cost of paying for pensions for retired public service personnel would increase from the current €3.4 billion to between €4 billion and €5 billion per year in the years ahead before peaking in the late 2030s and would then fall back. He said the annual increase in pension costs would be 3-4 per cent in the years ahead.

He told Fine Gael TD Colm Burke that this reflected the change in the Civil Service as the staff who were taken on in the 1970s – when the system expanded considerably – began to retire.

Mr Watt said the increased cost reflected the larger number of people who were retiring and longer life expectancy.

He said about 30-40 per cent of public service staff were now covered by the single pension scheme introduced in 2013 under which they received fewer benefits and paid higher contributions.

Mr Watt said the latest review of overall public service pension costs for the State showed an actuarial value of about €100 billion.