One nurse and one carer working 13-hour shifts looking after 24 residents, says director 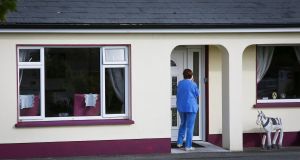 Most of the residents in the Nightingale Nursing Home in Ballinasloe, Co Galway, have contracted coronavirus. Photograph: Joe O’Shaughnessy

Staff at a nursing home in Co Galway in which 26 out of 28 residents have tested positive for Covid-19 have said they “feel abandoned” and are “in dire straits”.

One resident at Nightingale Nursing Home in Ahascragh died on Wednesday, from what is believed to be a Covid-related illness, while two others have been transferred to hospital on Thursday with the virus.

Patricia MacGabhann, director of nursing at Nightingale, said there was one nurse and one carer looking after 24 residents, 22 of which had tested positive for the virus. She said they had been working 13-hour shifts adding “I don’t know how they are coping”.

She said the HSE provided a nurse and a carer on Wednesday night and were supposed to provide two carers on Thursday morning but they never arrived.

“We’re trying to keep them [residents] alive and well, and we really feel abandoned. That’s the truth.”

A resident at the nursing home felt unwell last week and subsequently tested positive for coronavirus. Ms MacGabhann said residents and staff were tested on Monday and that there had been no cases previously at the home.

She said she had been in contact with the HSE and the Health Information and Quality Authority several times and that she felt “completely and utterly helpless” at not being able to help.

Ms MacGabhann said the response from the HSE was “don’t panic, leave it to me”, but she said she could not leave it with them and she was panicking.

“I’m so frustrated, I feel so helpless and so alone, we’re like a little island in the middle of Ireland that’s been abandoned,” she said.

Ms MacGabhann said the HSE had directed them to seek agency staff but that there were no workers available. She said there were contingency plans in place at the nursing home but that they did not envision such a large percentage of staff “would be taken out like this”.

She said it was “uncivilised that old people are just thrown aside”.

Ms MacGabhann said the nursing home had been open since 1996 and that if residents were not helped they may have to be moved to hospitals.

“We just want someone to help us keep them alive, from any quarter,” she said.

The HSE has said it was providing supports to the nursing home.

“The HSE is also conducting daily outbreak teleconferences with the nursing home.”

Rosters at the home are covered and the staffing situation is stable, according to HSE chief operations officer Anne O’Connor.

The HSE has a dedicated manager providing daily support, she said, and staffing was in place for the coming days.

A nurse from Roscommon hospital was in the home last night and the director of nursing from HSE West is there today to assess the stability of the situation, Ms O’Connor said.

“It has been a challenge to secure staff, especially agency staff,” Ms O’Connor said, adding that agency staff were sometimes unwilling to go into home due to outbreaks.

Hiqa said it was aware of the situation. “We are in constant contact with the nursing home and are aware that HSE is providing assistance to this provider,” it said.

Dr Daly said he had contacted the HSE as had local TD Denis Naughten who said the HSE had said there was no prospect of relief.

It could not be that an organisation with 120,000 staff could not provide relief for the nursing home, he said.

“The building is burning, They need to react. These are vulnerable, elderly patients. They deserve every chance to be looked after in their hour of need.

“This is their hour of need,” he said.

Dr Daly said he was seeing a lot of positive cases of Covid-19 among students in the area where he works in his general practice and at the Covid care hub in Athlone. “What we are seeing now far supersedes the levels seen in March, April and May.”

Minister for Health Stephen Donnelly defended the HSE’s response in the Dáil saying: “Let me be very clear. These cases were detected through testing the HSE does. Infection preventing control teams were deployed. Staff have been deployed. Serial testing is ongoing.”

He said “all staff and residents were tested” and “senior management are on site right now as we speak”.

Fine Gael TD Fergus O’Dowd told the Dáil nurses could refuse to work in private nursing homes infected with Covid-19 under an agreement reached between unions and the HSE at the start of the pandemic.

He said they were obliged to work in public homes and hospitals. But “there cannot be a division between a public and a private patient in terms of professional assistance from a medical or qualified person”.

The HSE made an agreement that it cannot direct nurses to work in private facilities and it was “against the oath and principle of care” and “entirely unacceptable”.

Minister for Foreign Affairs Simon Coveney said the outbreak “raises a red flag” on the need to protect nursing homes.

Mr Coveney acknowledged that the HSE had made mistakes on contact tracing in light of last weekend’s collapse in the operation and said that lessons must be learned from the first wave of the pandemic on protecting nursing homes.

“The HSE of course have made some mistakes, but our focus during an international pandemic and international crisis should be on solutions rather than blame. We have got to learn lessons, particularly in terms of how we protect vulnerable people in nursing homes,” he told The Irish Times.

“That’s why I think what we are hearing today raises a red flag that we have got to double down on ensuring that we are protecting residents in nursing homes in a much more impactful and effective way than we did in the first wave of Covid.”

In the Dáil on Thursday, Independent TD Michael Fitzmaurice said seven of the eight nursing staff and 10 of the 11 care assistants had tested positive for Covid-19. He said that when the director of nursing phoned the HSE they were told “don’t panic, get agency staff. But there are no agency staff.”

He said the HSE promised to send staff on Thursday morning to the home in his Roscommon-Galway constituency “and nobody showed up”.

Mr Fitzmaurice said “this nursing home is looking at having to send the rest of the residents into a hospital because the HSE did not send staff”.

Mr Naughten told the Dáil the nursing home was now being run for the last three days by a cook and two other staff. He called for a panel of staff to be put in place to go into a nursing home to deal with such cases, so that such cases are not repeated and these residents are not left in a deplorable situation.

Tánaiste Leo Varadkar said he was unaware of the case but would look into it immediately after this Dáil session and he was “reassured” to hear the Minster for Health “is on the case”.