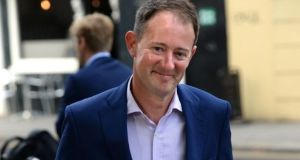 Sean Sherlock: ‘It is not feasible to exclude any party from the responsibility to act in the interest of the common good at this time.’ Photograph: Dara Mac Donaill / The Irish Times

Labour TD Seán Sherlock has said the party should enter talks on forming a “time bound” national unity government to deal with the coronavirus.

The idea of a national unity government was suggested by Fianna Fáil frontbench TD John Lahart over the weekend, with his party colleague Jim O’Callaghan also saying he would “go along with” such a proposal.

However, the prospect of such a government has been downplayed by the leaderships of Fianna Fáil, Sinn Féin and Fine Gael.

Mr O’Callaghan also suggested his party had perhaps been “too definitive” in ruling out Sinn Féin as potential government partners.

The Labour Party has so far ruled itself out of participating in government, although it has said it could support a number of government policies from Opposition.

However, Mr Sherlock, a Cork East TD said all politicians should “show leadership and form a government of national unity”.

“All of the Dáil parties should immediately enter time bound talks to form a government of national unity,” Mr Sherlock told The Irish Times. “That should include the Labour party.

“Given the unprecedented health crisis, its undoubted capacity for escalation, the real fears of people and the likely future need for decisive action, it is time for all of us politicians to show leadership and form a government of national unity.

“We have to think and act collectively to ensure the best outcome to this present challenge.

“It is not feasible to exclude any party from the responsibility to act in the interest of the common good at this time. Covid19 has the potential to be a massive public health emergency in Ireland.

“All aspects of daily life will be affected, necessitating a whole of government response with democratic legitimacy.”

Mr Sherlock said that social welfare payments may “need to be dramatically restructured and paid in a different way”, meaning that a “social protection minister with a mandate” may be needed.

Regina Doherty, the Minister for Social Protection, lost her Meath East Dáil seat at the general election but will remain in post until a new government is formed.

“We do not have to look too far for a model for a way forward. In Northern Ireland all parties are working together now,” added Mr Sherlock. “This proves that an all-party approach is possible and necessary.”

Taoiseach Leo Varadkar will brief all party leaders on Monday afternoon on the State’s approach to tackling the Coronavirus.

On RTÉ’s Sean O’Rourke show, Sinn Féin leader Mary Lou McDonald said it shouldn’t “take a public health emergency” for other parties to decide they may speak to her party.

However, she poured cold water on the idea of a national unity government saying it is a “bit of a distraction” at “this particular moment”.

Fianna Fáil’s deputy leader Dara Calleary also ruled out such an administration and said his preference is for a “strong government and a sustainable government”.