Labour’s hopes of rebirth must wait

Party gets some key wins despite Greens stealing its thunder 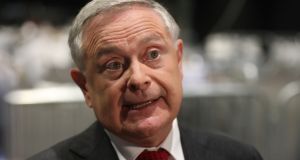 Behind Brendan Howlin in the RDS, hundreds of thousands of European election votes were counted in near-solemn silence. The solemnity matched much of the Labour mood.

The buoyant optimism that had taken hold among Labour Party members in very last few weeks of the local and European elections had fizzled out quickly by Saturday morning. By Sunday, it was flat as days-old lemonade.

If Labour had hoped to emerge as the headline victors of the weekend, and they did, then they were to be left disappointed. The Green Party had stolen Labour’s thunder, Howlin admitted.

Poll after poll in local election wards was topped by Green candidates, while reporters clamoured to interview Eamon Ryan, Ciarán Cuffe and Saoirse McHugh at count centres, not Labour victors.

Despite the gloom in the ranks, strategists in the party focused on the seats they would hold, while eyeing hopefully a few new ones, sometimes thanks to transfers from the Greens.

Presenting the results of the locals in a positive light, Howlin said: “I am not at all disappointed. Everyone has been impacted by the Green surge including us. But we had 37 incumbents looking to be re-elected.

“We will have at least 57 seats, so that is 20 new councillors in key areas that are targets for us. So we see the building I expected to happen happening. We would have liked a greater pace of increase but that was impacted upon by the Green surge,” he said.

What could not be glossed over, however, was the party’s result in the European elections.

“It is certainly not so good in the Europeans because everybody was impacted by the Greens, people who would normally be in our category, they are the centre-left voters who we would have expected to vote for Sheila Nunan, Alex White and Dominic Hannigan obviously voted for Greens on this occasion,” Howlin said.

One prominent party member said privately on Saturday evening that the issue of party leadership now has to be on the table. They said that there was a suspicion that voters were tired of hearing the same voices on television and radio and that it was no surprise they opted for something new in their local and European choices.

Their exasperation with the party’s overall performance was palpable.

Mr Howlin himself did not appear too pleased to be asked about his leadership on Sunday, in the context of the election being less promising than some would have hoped.

“Why is it not as promising? I’m just telling you we are going to have a 25 per cent increase in our seats. That is a fairly good election,” he said.

In a sense, he is right. In a distinctly Green election, there were a few key wins.

These include the election of Michelle Hall in the Drogheda Rural ward, the election of Kevin Donoghue in the South East Inner City of Dublin, Ciara Galvin in Celbridge and Seána Ó Rodaigh in Skerries Balbriggan. Jane Horgan Jones was elected after the eighth count in Clontarf and Lettie McCarthy took a seat in Glencullen/Sandyford. Party stalwart Joe Costello was elected on the 12th count in the North Inner City.

Inevitably, the focus turns to what is next for the party. Howlin is meeting with Green Party leader Eamon Ryan this week to discuss forming a civic alliance at a local level. Behind the scenes, it is appears the bulk of enthusiasm for this is coming from the Labour camp, who are keen to find relevance again.

But with all parties giving bedroom eyes to the Greens, Mr Ryan has made it clear that he expects a broader arrangement involving other parties, including Fine Gael and Fianna Fáil if possible. “We shouldn’t exclude any party,” he said.