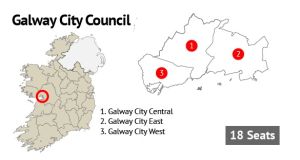 The Green Party secured two seats on Galway City Council after Martina O’Connor secured the 18th and final slot after a marathon recount on Monday night.

She joins fellow newcomer Pauline O’Reilly in the new council. Six of the 18 councillors have been elected for the first time. Another newcomer, Fine Gael’s Eddie Hoare, took the third seat in Galway City Central following a recount that lasted more than 10 hours. John McDonagh, who was hoping to hold on to the Labour seat held by the retiring Billy Cameron, called for a recount as he was about to be eliminated when finishing eight votes adrift of Martina O’Connor of the Green Party in the ninth count.

The recount finally ended just before 9pm and found that John McDonagh and Martina O’Connor were level on 768 votes each. The two candidates and others in the running had legal representatives on site as the recount was scrutinised throughout the day. John McDonagh was eliminated as Martina O’Connor had 544 first preference votes to 527 for the Labour Party candidate.