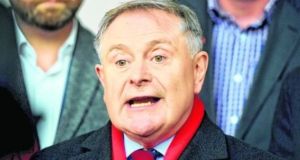 Brendan Howlin succeeded Joan Burton as Labour leader in May 2016.

Sixteen Labour councillors have signed a letter in support of the embattled party leader Brendan Howlin.

The party’s low poll ratings, which have shown them as low as three per cent, have provoked some members of the party to call for a change of leadership.

Cllr Kearns said “only a change of leadership and a fresh approach can unite the party and achieve the momentum we need to move forward”.

Mr Howlin succeeded Joan Burton as Labour leader in May 2016. There was no contest as the former minister for public expenditure and reform was the only candidate put forward.

Many councillors have resented the fact that the leadership of the party was decided by Labour’s seven remaining TDs and some in the grassroots would have preferred Alan Kelly to have been party leader.

In response to the four councillors calling on Mr Howlin to step down, the 16 councillors said now is not the right time to change the leadership of the party.

They acknowledged that recent poll ratings for the party are “disappointing” but representatives on the ground are “working day and night” to change that.

They stated: “Issues like housing, precarious work, childcare, free education are core policy areas of the Labour Party and we believe all efforts should be made to campaign on these.

“For example the recent radical housing policy document launched by the Labour Party which advocated a state run housing programme is the work our representatives need to be focusing on.”