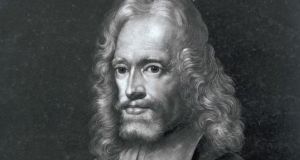 The National Monuments Service has been contacted about another Meath archaeological find, uncovered by the heatwave - the possible childhood home of St Oliver Plunkett.

The outline of a house, containing three big rooms and four smaller rooms, with a pathway leading to the church in the grounds of Loughcrew Estate, near Oldcastle, became apparent during the prolonged spell of dry weather recently.

St Oliver Plunkett grew up on the estate but the precise location of the house was unclear, although it is mentioned in the civil survey of 1612.

The possibility of the site being his ancestral home has excited owner of the estate Emily Naper, a direct descendant of the the Saint who was canonised in 1975 and whose head is on display in St Peter’s Church in Drogheda.

“I’m not an archaeologist by any means but it’s a fair assumption to make that this is the house, especially as the path seems to be linked straight to the church,” she said.

“The 1612 civil survey describes the tower house, motte and bailey and ring fort, which are still in the estate.

“It also mentions the church, a millhouse as well as 60 cabins in the garden, along with what was then the main house.

“You can make out three big rooms of the same size and then four smaller rooms at the back which could have been bedrooms. It would be lovely to have the site examined, dated and verified.

“It’s amazing that the path runs directly to the church, where dozens of couples still come here to get married each year on the estate.

“It’s also just been documented by an American researcher that tyrant Oliver Cromwell pulled the roof off the church when he confiscated these lands from the Plunketts,” she said

It was only at the first shower of rain after the dry summer that Emily decided to take pictures.

“We had to do something before it disappeared again, so we marked it out with paint and took loads of photographs.”

St Oliver was born at Loughcrew in 1625 and ordained a priest in 1654 and later became Archbishop of Armagh.

He was hanged, drawn and quartered for treason on July 1, 1681 and became the last Roman Catholic martyr to die in England.

He was canonised in 1975, becoming the first new Irish Saint for hundreds of years and among those in attendance at the Rome ceremony was Emily’s grandmother Sheila Plunkett.

In recent weeks, a number of crop marks at sites across the Boyne Valley have been revealed due to the dry weather.

The National Monuments Service said it was informed last Tuesday of a report of a cropmark indicating a building at Loughcrew and has asked those who reported the discovery to complete a monument report form.

“At that point the National Monuments Service will assess the report, as it does with all such reports, against known heritage records for the Loughcrew area.”