Pools of blood, bodies left for days and looting - why has this painful period been forgotten? 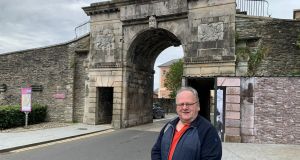 Local historian Ivor Doherty at Bishop’s Gate in Derry. Thirteen of the 20 victims of the fighting in a single week in June 1920 died in this area.

For one week in June 1920, Derry was “like a town on the Western front.” So wrote the eyewitness, Charlie McGuinness, in his memoirs; reports in this newspaper painted graphic pictures of troops deployed on narrow streets, pools of blood lying on the ground, and bodies left for days before they could be recovered.

Twenty people died in the fighting. The first victim, Edwin Price, was a 45-year-old veteran who had served in the ambulance corps of the 36th (Ulster) Division during the First World War and was shot as he stood at the door of a hotel; among the last was 10-year-old orphan George Caldwell, struck by a bullet in the yard of the children’s home where he lived.

Each is remembered in a new exhibition - moved online because of coronavirus restrictions - which seeks to shed light on this forgotten episode in the city’s history, and to acknowledge those who lost their lives 100 years on.

They have been researched by local historian Ivor Doherty, who grew up with the story of that June week thanks to his mother’s tales of his grandfather Matthew’s involvement.

“I felt, we have to remember the people that died,” says Doherty. “We can’t let 1920 go and not remember what happened here.”

The fiercest fighting was around Bishop Street, then, as now, a nationalist area which forms what would be later termed an “interface” with the unionist Fountain. Thirteen died here, explains Doherty; standing on the street, he points out where there were killed. “See about 40 yards up from those traffic lights, one woman, Elizabeth Moore, she literally puts her head out the door.” He snaps his fingers. “That’s it. Somebody saw her, took her head off, just blew her away.”

Matthew Doherty was OC of Derry’s third battalion of the Volunteers. He had followed John Redmond’s call and fought in the First World War; when the fighting broke out in Derry, he was one of the “old Redmondites” who took up their guns again to defend nationalist areas.

“They got themselves involved in stopping the looting,” says his grandson, “and it was announced in the press after it was all over that the Protestant shopkeepers in William Street had thanked the Irish Volunteers for their help.”

The Volunteers were just one of the armed groups on the city’s streets, explains historian Dr Adrian Grant from Ulster University. Derry was “a powder-mine”, the Irish Times wrote in an editorial June 23rd and “a match thrown into it from either camp was bound to produce a general explosion.”

Tensions had been simmering since before the First World War; these intensified in its aftermath, and the situation which prevailed across Ireland was made all the more acute in Derry because of the Border question.

“Nationalists firmly believed it would be part of the Southern jurisdiction, whereas unionists were very fearful, given that they were the minority population in the city,” says Grant.

Municipal elections in January 1920 had, for the first time, returned a nationalist majority; their control of the Guildhall, Grant says, “challenged the symbolism of Derry as a unionist stronghold, as the siege city.”

“A number of people emerged from the Fountain area into Bishop Street and began firing into the crowd,” says Grant. “Three to four people were killed in that first attack, and that was then met by revolver fire from IRA members within the crowd.

The army brought a temporary halt, but the fighting resumed when they pulled out in the early hours of the morning; another civilian was killed shortly afterwards.

“From that point on it spiralled out of control,” says Grant.

The city was at war; the IRA was mobilised, bringing in guns from Donegal and taking over what was then St Columb’s College as their garrison headquarters. They were joined by nationalist ex-servicemen, including Matthew Doherty; on the unionist side, the UVF reformed.

“You had First World War veterans, nationalist and unionist, who had been in the same army just two years before, fighting against each other, probably using their service rifles,” says Grant.

One of the most notorious episodes of the week was the killing of Howard McKay, the son of the governor of the Apprentice Boys - a loyal order similar to the Orange Order - who was placed against a wall, blindfolded and shot, allegedly for refusing to reveal the location of UVF arms dumps.

James Keenan, a staff officer with the Derry City battalion of the IRA, was one of a number of men later tried and acquitted for his murder. His great-grandson, Colm Barton, is now the co-ordinator of the exhibition.

“The North took part in the War of Independence but didn’t get their independence,” he emphasises. “So it’s been excluded from this history.”

Troops eventually restored order; remarkably, it was the end of large-scale sectarian violence in the city. Derry would not see deaths on this scale until the Troubles, in stark contrast to Belfast, where 500 people would die between July 1920 and July 1922.

Why this was so is less clear. Grant posits that community relations may have been stronger in Derry; after the Border was confirmed by the Boundary Commission in 1925, “the fight had been lost. I think a lot of people just kept the head down and moved on.”

Memories were buried. “People didn’t generally speak about it as far as I can see,” says Grant. “That doesn’t mean it was dealt with, it just means it was pushed further down and suppressed.

“The tensions and everything that go along with it were still there, obviously, as we saw in the later part of the century.”

He believes more research is needed. “This is understudied stuff. I don’t think it gets the attention that it should given how significant it was.”

It is “crucial”, says Barton, that this be remedied. “History is something we need to know about and learn from and acknowledge, in all its complexities.”

Doherty’s wish is that the victims be remembered. “These are people that lived in streets I’ve lived in, and walked on streets that I’ve walked on,” he explains.

“Only for Covid, we would have been opening an exhibition now of all of this. Why could we not even go to the war memorial and lay a wreath in memory of those people? I don’t know the answer to that, because I don’t hear anybody talking about it.”

June 1920: Derry’s Civil War, an online exhibition by Áras Cholmcille, the Museum of Free Derry, The Gasyard Feile, Tar Abhaile and the Triax Neighbourhood Management Team is available now on the organisations’ Facebook and Twitter pages.