Daniel Kinahan has a bad day all round

Kinahan is out of boxing, three associates get 19 years, and then there was the Garda press briefing... 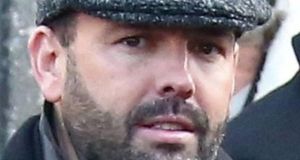 Daniel Kinahan’s dreams of transforming himself into a legitimate figure at the top table of boxing lie in ruins.

Monday was not a good day for Daniel Kinahan.

It started with an interview given by Bob Yalen, the president of the MTK sports management company which was founded by Kinahan in 2012. Yalen told sports website The Athletic that Kinahan would be stepping back from boxing.

“Daniel’s going to be taking time away from the sport to focus on other interests and hopefully this will put a stop to the negative press from Ireland that’s based entirely on hearsay,” he said.

“And it’s unfortunate for his fighters that he’s taking this step back. But I respect his personal decision.”

Some healthy scepticism is needed here. In the past, MTK itself has said it was cutting ties with the Dublin crime boss only for it to later emerge Kinahan was still closely involved with the company and its stable of fighters.

But the announcement is important as an acknowledgment that, while boxing has a short memory, it is not that short.

Even before Yalen’s comments, Kinahan’s dreams of transforming himself into a legitimate figure at the top table of boxing lay in ruins.

Last week it was announced Kinahan would play no further role in negotiating a two-fight deal between heavyweight champion Tyson Fury, who Kinahan advises, and rival Anthony Joshua. The week previously a sports company, owned by a Bahraini prince, cut ties with him citing its “integrity” and “principles”.

The likely result of these developments is whatever role Kinahan plays in professional boxing from now on, it will be from the shadows.

The next piece of bad news could not have been much of a surprise. At the Special Criminal Court three Kinahan associates were sentenced to a total of 19 years for planning the murder of gang rival Patrick Patsy Hutch while another two pleaded guilty to the same offence. A total of nine people are now in jail for the 2018 plot. Over the past several months the Garda has used the many hearings in the case to put on public display the inner workings of the Kinahan gang and its assassination operations.

The icing on the cake came at 2.30pm at a press briefing by Assistant Garda Commissioner for Special Criminal Operations John O’Driscoll. The briefing was ostensibly about the Garda’s success in tackling organised crime in general since 2015, including what it said were 75 foiled assassination attempts.

But inevitably most of the questions focused on Daniel Kinahan. O’Driscoll steadfastly stuck to Garda policy on not naming individuals who have not been charged, but his point could scarcely have been clearer: Gardaí are focused on bringing Kinahan before the courts and they believe they can do so.

Although he did not mention Daniel by name, O’Driscoll was happy to mention the family business. “What is clear is that the Kinahan organised crime group has wreaked havoc on the communities. They are involved in drug selling and it is that drug selling which has wrecked the lives of so many people within the community,” he said. “It is ultimately our aim to dismantle the entire crime group.”

The senior garda reserved some of his final words for the sport Kinahan has attempted to use to whitewash his reputation.

Boxing is a “very important sport in the inner city” which has produced “many people who have represented their country with distinction”, the Assistant Commissioner said.

“Unfortunately, there have been many people in inner city communities in Dublin who have never been able to box because they have been destroyed by organised crime groups such as the Kinahan group.”