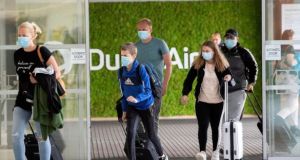 Irish Travel Agents Association chief executive has said the new Government should move to cancel flights so people who have booked foreign trips can get their money back.

Giving permission to fly and yet saying not to fly was unfair, Pat Dawson said.

He also called for clarity on so-called air bridges. Under the Government’s air bridges plan, it was understood Irish tourists could go on foreign holidays from July 9th to other countries that have brought coronavirus under control.

Mr Dawson’s comments come after chief medical officer Dr Tony Holohan said people who had booked overseas trips should not travel at present due to the risk to themselves, their families and wider society.

Asked on Monday whether people should cancel their summer holidays abroad, Dr Holohan said public health officials would like them not to travel in their individual interest and in the collective interest.

“Think about other people and the risk you might pose even if you [ if infected] recover very well, for people who are more vulnerable,” he said.

Mr Dawson told RTÉ Radio’s Today with Sarah McInerney show on Tuesday there were three important issues that needed to be addressed before travel could return to normal: safety in airports, safety on airlines and up-to-date information on countries it is safe to visit because they have low Covid-19 rates.

Mr Dawson added he is encouraging people to postpone their holidays to the end of this year or next year.

Public health expert Dr Gabriel Scally told the same programme he did not think air bridges were the solution and that there was in fact no real solution other than to “get rid of the virus in Ireland”.

Ireland should follow the example of countries like New Zealand and introduce strict quarantine measures for people arriving into the country, he said, adding there were enough hotels near the airports to do this.

Dr Scally said he agreed with the concerns raised by Dr Holohan about travel. “The last thing we want is people going off on holiday and then bringing back the virus or find themselves in the midst of a flare-up.”

People could find themselves “stuck” abroad with no insurance cover, Dr Scally said, adding this should be the year people holiday in Ireland. “That’s the right thing to do. The country has done well so far – we shouldn’t encourage international travel.”

If there were zero cases in Ireland it would mean people could travel around the country with fewer restrictions, he added. The current system of self isolating was not strong, and the Government should introduce compulsory quarantine. That was the only safe way, he said.

Virologist Dr Kim Roberts agreed on the issue of compulsory quarantine. She said international travel was a privilege and people needed to value that privilege and the only way to have control was to have restrictions. “If people abuse them then we will be back to lockdown,” she warned.

Dr Roberts said young people seemed to think they were bulletproof and could pass on the virus to others while not experiencing symptoms themselves. If there was compulsory quarantine then people would be in a place where they could be monitored.

For people who survive Covid that was “just the beginning of the journey – there are long lasting health implications,” she said.

According to the DAA, which operates Dublin Airport, there was just over 4,000 passengers arriving and departing on Monday, down from 116,000 on the equivalent day last year.

Nevertheless, flight activity is expected to significantly increase over the coming month. Ryanair is expected to lead the way in an escalation beginning on July 1st - in May it announced its intention to restore 40 per cent of its schedules, including 139 routes from the Republic.

How full flights will be remains to be seen but in a recent interview with the Irish Times the airline’s chief executive Michael O’Leary, critical of government policy on quarantine rules, predicted a “stampede” of Irish families rushing to go on foreign summer holidays with a surge in recent bookings.

In a statement last week, Aer Lingus said while it welcomed the government decision to end quarantine requirements, “there is no plan to provide clarity until 9th July on what countries are involved [in potential air bridges] and what criteria will be applied to their selection totally undermines the initiative”.

At present passengers arriving in Ireland must quarantine for 14 days.

1 Covid-19: Five deaths and 15 new cases reported in State
2 Pygmalion pub mired in weekend social distancing row
3 Bobby Storey: The IRA's planner and enforcer who stayed in the shadows
4 Ireland has lowest current incidence of Covid-19 in western Europe
5 All change at the unique Ashford Castle in era of Covid-19
Real news has value SUBSCRIBE