Ballot papers will be sent out to party members in the first week of July, with July 22nd the final date for the return of ballots 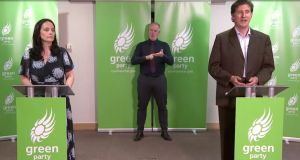 The Green Party will begin election hustings next week as the leadership election between current leader Eamon Ryan and deputy leader Catherine Martin gets under way.

Party headquarters confirmed that a series of four online hustings will begin next Tuesday, with another on Saturday week, followed by a further two events on the same days the following week.

Ballot papers will be sent out to party members in the first week of July, and the final date for the return of ballots will be Wednesday, July 22nd. The election count will take place on Thursday, July 23th.

The party constitution requires that nominations for the leadership of the party be opened after a general election, but there was surprise inside and outside the party when Ms Martin expressed interest in running for the position, and then confirmed she would accept a nomination during the negotiations on the programme for government.

Although she opposed opening the negotiations with Fianna Fáil and Fine Gael in May, Ms Martin led the negotiating team, and her support was instrumental in achieving a big majority of members who voted to accept the deal and enter coalition last week.

On Saturday she was appointed Minister for Media, Tourism, Arts, Culture, Sport and the Gaeltacht.

Both herself and Mr Ryan said they would not campaign until the government formation process was completed.

Mr Ryan confirmed on Sunday that a leadership contest would go ahead, but said his and Ms Martin’s first priority would be to settle into their ministerial jobs and begin their work in government. He denied the contest would be divisive.