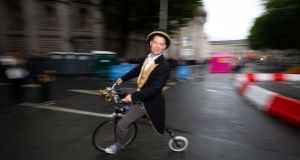 Dublin’s College Green was once again closed to traffic for a Sunday afternoon after experimenting with the initiative three times over the summer.

Crash barriers to separate the footpath from the road were again on display and, while they previously caused a degree of controversy, there seemed to be fewer of them than before.

Certainly the crowds who took advantage of the break in the torrential downpours of earlier in the day to explore the car-free zone were able to mingle around the temporarily pedestrianised areas, with most of them appearing to be delighted by the absence of traffic.

Instead of the usual buses and taxis there were men on stilts and jugglers menacing English hen parties. There were giant deck chairs, video screens on which mindfulness talks played, a bike mechanic’s station, bike hockey, a frisbee arena and tango dancers, among other attractions.

A Russian chess player took on eight people at a time in a tent, and over the course of the afternoon remained unbeaten although he had offered one of his opponents a draw.

“I am a grand master, if that is any consolation,” Alex Baborin said as he checkmated his 22nd opponent in less than an hour.

When asked if he would like to see the area permanently pedestrianised he was unsure. “I like this, it is different, but I don’t know if it could be a long-term feature of the city. You already have Grafton Street pedestrianised nearby. Maybe it could be closed off to traffic for a bit of the summer?”

Andrew Wilkinson from Harold’s Cross had a stronger view on the subject, perhaps unsurprisingly as he and his two children were all on bikes.

“I don’t drive much any more so I would like to see more pedestrianised places in the city,” he said.

“This area seems perfect for it as it is mainly only used by buses and taxies and it is a great space. Other cities do it so why can’t we? I mean look at Berlin? That is an amazing place for pedestrians.”

Tom Davison from Essex was in the city for the weekend and loved the new addition. “There are some lovely old buildings around here and I think it really works when there are no cars here,” he said, adding that “maybe they could make it more like Temple Bar?”

While there were signs warning people not to cycle or consume alcohol, everyone seemed to be on their best behaviour and the Garda did not appear to have a whole lot to do.

Gardaí policing the event accepted that the steel barriers installed along stretches of the footpaths were not the most attractive pieces of street furniture but said they had been put in place to ensure that shoppers who had no interest in the events on the street could go about their business unimpeded.

“They are pretty ugly,” one garda admitted. “But I think if this was to become a permanent fixture of the city then they would come up with more attractive ways to make it work.”