High-end market hit by Brexit uncertainty as people ‘scared to do anything’, says expert 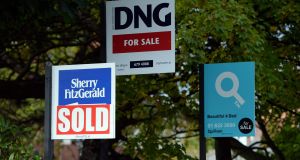 Property prices in Dublin are now falling for the first time in seven years, according to official figures, which show the average cost of a home in the capital fell by 0.2 per cent in the 12 months to July.

Prices in Dún Laoghaire-Rathdown – which is the most expensive region in the country in which to buy property and is typically seen as a key indicator nationally – saw a decline of 6.3 per cent.

The latest figures from the Central Statistics Office show residential property prices nationally rose by 2.3 per cent in the 12 months to July, which was marginally higher than the previous month, but well down on the 10 per cent recorded this time last year.

Industry observers said uncertainty over Brexit is to blame for the significant decline in high end property prices in Dublin, while increased supply and the Central Bank’s mortgage rules have led to the more modest declines elsewhere in the capital.

On the drop in prices in Dún Laoghaire-Rathdown, DNG chief executive Keith Lowe said it “has a lot to do with Brexit”.

“There is no question that bit of uncertainty has affected the high end of the market,” he said. “People are scared to do anything because they just don’t know what’s going to happen.”

Sherry FitzGerald chief economist Marian Finnegan said the geopolitical turmoil from the US and the UK was “creating uncertainty”. She said “people spending large amounts will be a little bit nervous so that will impact the upper end”.

The figures show the highest house price growth in the capital was in south Dublin at 3 per cent.

In terms of the reduction in prices in the capital generally, both Mr Lowe and Ms Finnegan said affordability was a concern due to the Central Bank’s mortgage lending rules.

However, Mr McCartney said the issue was a “fig leaf” and that the depression in values was a natural consequence of supply catching up with demand. “Supply went up 25 per cent last year and something like 37 per cent the year before,” he said.

Residential property prices in the Republic, excluding Dublin, were 4.8 per cent higher in the year to July.

The region outside of Dublin that saw the largest rise in property prices was the Border at 16.1 per cent, while the smallest rise was recorded in the mid-east at 0.4 per cent.

Leo McCauley of McCauley Properties in Inishowen, Co Donegal, said there were more people buying property in the Border regions but that the figures were pitted against a “very low base” following a severe decline since the recession.

“Things around the Border were so, so depressed,” he said. “My turnover is up this year and I have been busier. Also, there probably hasn’t been a house built in Donegal for 12 years. If you see a concrete lorry coming up the main street, it’s like seeing a T-Rex walking up. It’s so archaic at this stage.”