Greta Thunberg tells leaders ‘we are united and unstoppable’ 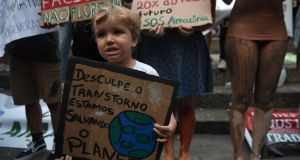 The world is losing a race against climate change but young people have brought about a welcome change in momentum, the United Nations general secretary Antonio Guterres declared at the UN’s first youth climate summit. Photograph: Mauro Pimentel/AFP/Getty Images

The world is losing a race against climate change but young people have brought about a welcome change in momentum, the United Nations general secretary Antonio Guterres declared at the UN’s first youth climate summit.

His comments came after he was “keynote listener” at the opening session where climate activists including Greta Thunberg outlined what they believed should be done to avert the crisis threatening the Earth. He began his remarks by observing, “world leaders talk too much”.

He added: “We’re not there yet. We’re still losing the race against climate change. But I feel that there’s a change in momentum largely due to your [Greta Thunberg’s] initiative and courage.”

Mr Guterres said young people were an “essential” element in combating the climate crisis, while the gathering was “a critical milestone ahead of Monday’s Climate Action Summit”. He has asked world leaders to come with bold, concrete plans.

Greta Thunberg (16) was the first speaker, delivering a short statement and explaining she wanted to leave more time for other speakers, as she would be addressing Monday’s summit attended by global leaders.

“Yesterday, millions of people across the globe marched and demanded real climate action, especially young people. We showed that we are united and that we, young people, are unstoppable,” she said.

Earlier she tweeted: “over 4 million joined climate strikes in 163 countries ...”If you belong to the small number of people who feel threatened by us, then we have some very bad news for you: this is just the beginning. Change is coming – like it or not.”

Argentinian Bruno Rodriguez (19), who led school strikes in his native country, made an impassioned plea for political leadership

“Many times, we hear that our generation is going to be the one in charge of dealing with the problems that current leaders have created, and we will not wait passively to become that future: the time is now for us to be leaders.”

“The decisions about our future are still being made largely without us,” said Marina Melanidis, a Canadian delegate. “Young people deserve to co-design their own futures – and honestly, you can’t do that without us,”

Komal Karishma Kumar from Fiji, warned young people would start to hold leaders accountable at the ballot box if they did not step up efforts swiftly to address climate threats. “We will mobilise to vote you out,” she added.

Pita Taufatofua, an Olympic athlete from Tonga who lives in Australia, broke down in tears describing how his Pacific island homeland had seen half of its buildings destroyed by a powerful cyclone while he competed in skiing at the 2018 Winter Olympics in South Korea.

“If 50 per cent of New York disappeared, people would act. Fifty percent of my country was wiped out in one night and people haven’t acted yet.”

Gabriela Cuevas, a Mexican legislator, urged youth leaders to search for ways to “translate your activism into policy and legislation. Do not expect the same people [ IN POWER ]will change everything,” she added, “So, welcome to politics.”

Ireland and the Marshall Islands jointly called on Governments across the world to pledge to include young people in climate policy creation under what is known as the Kwon Gesh Youth Pledge launched at the summit. The term refers to “solemn duty”; symbolising the duty this generation owes to the next generation. This initiative will feed into deliberations by heads of state on Monday.

The summit brought together 1,000 young activists, innovators, entrepreneurs, and change makers committed to combating climate change “at the pace and scale needed”.

It also featured success stories on restoring oceans, using nature-based solutions, and the use of technology to counter the worst effects of climate disruption– such as in anticipating extreme weather events.

UN envoy on youth Jayathma Wickramanayake told delegates: “Global emissions are increasing, temperatures are rising and the impacts of climate change are growing ... for the 1.8 billion young people between the ages of 10 and 24 years, the issue is felt with far more urgency as it will shape their lives in ways never witnessed before.”