New Dublin homeowners ‘not too worried’ about house price fall 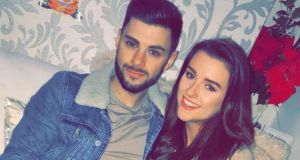 First-time buyers Nikki Willis and Rob Pallin: they finalised the purchase of a property in Dublin last month

First-time buyers Nikki Willis (26) and Rob Pallin (27) started talking about buying a house about three years ago, but with property prices skyrocketing and Central Bank limits on getting a mortgage the issue took something of a back seat.

However, about 18 months ago they “put the foot down” and began to put together a savings plan. “We were both living with family,” Ms Willis said on Thursday. “It’s impossible to save for a deposit when you’re renting.

“We really wanted to live in Dublin but the prices for a new home were just so expensive. We started saving a good chunk of money and put a plan together. We were putting about €2,500 away each month between the two of us.”

About a month ago the couple finalised the purchase of a property in the Newpark development in Adamstown, Dublin, for €310,000. “Without the Help to Buy scheme I don’t think we would have been able to buy a new home,” said Ms Willis.

On Thursday’s figures from the Central Statistics Office showing the first fall in property prices in Dublin for seven years, she said: “Prices are always going to go up and down. We’re buying a home to live in for the long run so we’re not too worried for now.”

The Eircode with the highest median or middle price for a house purchase was Blackrock, Dublin, at €600,000. The 10 most expensive Eircode areas by median price were all in Dublin.

Despite the fall in prices in the capital, Savills director of research John McCartney said there were no signs of a property crash such as that which was the hallmark of the economic crisis a decade ago.

“I don’t think there is any major imbalance building up. I think it’s interesting to note there has been no increase in construction employment in the last year, and that there has been a bit of a slowdown in the housing development pipeline.

“I think the industry has worked out itself that we’re getting to the point where we’re building just about the right amount of dwellings per annum to meet the demand that’s there in the medium term. I don’t think it’s going to be anything like what we had a decade ago. It’s an entirely different dynamic.”

“Affordability is a huge issue, and despite what is acknowledged as a housing crisis no real inroads have been made into addressing it. The only real way of addressing it is by bringing down house input costs.”

Keith Lowe, chief executive of estate agent DNG, also said affordability was an issue for buyers due to the Central Bank’s mortgage rules.

“If you can only borrow a multiplier of your income that curtails property price growth. To some degree that’s a good thing. I do think the Central Bank’s rules are a little harsh and should be softened somewhat. But it is good that they’re there because they have halted an undesirable continuing increase in prices.”