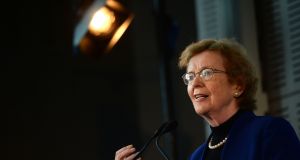 The fossil fuel industry will not change its ways and move to contribute to ending the global climate change threat until it is forced to do so, according to former president of Ireland, Mary Robinson.

Large energy firms, who continue to generate fossil fuels – the single biggest contributor to global heating – will have to brought to heel by “litigation or actions by shareholders”, she stated.

Mrs Robinson was speaking in New York ahead of the United Nations Climate Summit, which is being attended by more than 100 global leaders, including Taoiseach Leo Varadkar.

Continuing rises in global emissions meant widespread subsidies for fossil fuels “must stop”, while its replacement by renewable energy must happen “much more rapidly”.

She expressed little joy on hearing news that US president Donald Trump will attend a gathering in Manhattan to chair a meeting on religious freedom: “He’ll clog up the whole system,” she feared.

“He won’t go to the climate summit and he wants the distraction factor, I suppose,” she added, saying his security entourage will further complicate the scene around the UN headquarters.

Addressing an “intergenerational town hall” gathering where young leaders engaged with world leaders, Mrs Robinson, who chairs The Elders group, said as an “old-timer”, she believed young people had already changed the debate “because of your direct action, your anger and your pain”.

A key mechanism to maintain momentum was to establish climate youth councils in every country, to feed into national parliaments and climate policy making – already, she noted, some countries are going this route with success.

The climate marches on Friday involving millions of young people and the UN youth climate summit on Saturday was “calling out adults in the world”, who must earn trust “by doing what we are supposed to be doing”.

She was delighted the climate justice movement had become so strong, backed by a much broader understanding that the issue was critical; not just about poor countries “and nothing to do with me”. It was essentially about “intergenerational justice, which is an issue for every family in the world”.

Minister for Climate Action and Environment Richard Bruton also attended the townhall gathering of 600 young people nominated to attend by their home country including four representatives from Ireland.

The process was meaningful and another indication of the level of momentum being achieved by young people, he said, “which has given a great deal of leverage within our political system to make climate the top political priority”.

In addition, the UN was where countries step up their ambition and make the commitment to targets, and lay out plans for the UN to oversee. “It’s really relevant that young people are being brought into that arena...I think the energy that was there, the passion, the anger but also the solidarity and sense of justice can’t but inspire.”

This was a mobilisation of people which was changing the attitudes of governments as they come to conferences like these, he felt.

‘Habits of a lifetime’

Applying that in the Irish context, Mr Bruton said there was a pattern evident with, for example, major Constitutional changes, where “the voice of younger people” was the common denominator dramatically changing the attitudes of others set in their beliefs.

In the same way, the persistence and growth of the climate protest, backed by the perception “that their generation is being robbed by our generation”, was shifting opinion.

Committing to political action was one thing, but delivering it was a significant challenge. There would be conflicts to be resolved, such as carbon pricing. “Inherent in this is confronting the habits of a lifetime,” he added.

That included the infrastructure and industries that had built up around those habits, which would have to shift to new industries and infrastructure, he said. For young people it required carrying forward the momentum and going beyond pointing the finger.

There was evidence this was already happening, reflected in sessions at the summit where young people were coming up with ideas they could implement themselves, and on how to mobilise to get greater numbers of people involved.