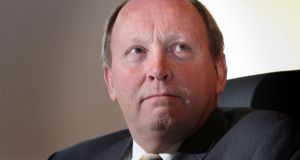 Jim Allister: he says the Northern Ireland Protocol is part of a plan to create “political unity” on the island of Ireland

Traditional Unionist Voice leader Jim Allister has called for the DUP and Ulster Unionist Party to join with him in seeking to undermine the Northern Ireland Protocol.

Mr Allister described the protocol as “more perilous to the union than anything I have witnessed in my lifetime”.

“I am dismayed at the lack of a political plan by the lead parties of unionism to counter it taking root,” he said.

Mr Allister said he had three “immediate proposals”. Firstly, the DUP and UUP should “freeze” their involvement with all cross-Border bodies and the North-South Ministerial Council.

Secondly, unionist ministers should “veto” any EU-related legislation coming before the Northern Executive, and, thirdly, the DUP agriculture minister Edwin Poots should direct his officials not to co-operate in running Irish Sea border checks.

The TUV leader said that the protocol was part of a plan to create “political unity” on the island of Ireland.

“The infrastructure of the Irish Sea border is the physical manifestation of not just the partitioning of the United Kingdom but the locking of Northern Ireland into the economic orbit of the Republic/EU,” he said.

“Over time, as GB progressively diverges from the EU, we are to be left in its bondage, with our economy by compulsion reorienting away from that of the UK to that of the Republic.

“That is the evil genius of the protocol: disrupting our supply chains from GB will force ever-increasing supply chain dependence on the Republic, and, thereby, the all-island economy becomes a reality,” he said.

“Faced with such a betrayal the leadership of unionism should be fighting back with a determined political strategy to undo the protocol. Instead of building its Irish Sea border and approving its laws we should be creating the circumstances where the protocol cannot survive.”

The TUV leader said that a united unionist rejection of the protocol would “dispel a perception that those unionists in power care more for their positions than they do for the principles at stake”.

“Across the unionist community there is a significant loss of morale which requires evidence of a ‘fight back’. We cannot go on as we are, as if nothing has happened,” said Mr Allister.

The DUP and UUP so far have not responded to the proposal.