Rev Jackson in Derry to open the Museum of Free Derry 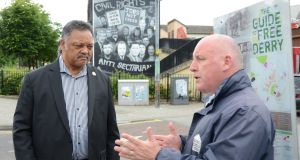 The Rev. Jesse Jackson tours the Bogside, Derry, with guide Paul Doherty, whose father Paddy was killed on Bloody Sunday.

Martin McGuinness was a peacebuilder of the same stature as Martin Luther King or Nelson Mandela, the civil rights campaigner Rev Jesse Jackson has said.

Rev Jackson is in Derry to officially open the refurbished Museum of Free Derry on Thursday.

The museum, in the city’s Bogside, tells the story of the area from 1968 to 1972, including the emergence of the civil rights movement and Bloody Sunday.

He also plans to visit Mr McGuinness’s grave to pay his respects to the former IRA leader who became the North’s deputy first minister.

Rev Jackson, who was shown around the original museum by Mr McGuinness on a previous visit in 2011, described him as “a transformative force for justice and peace.”

“He had the power to combine a kind of synthesis in his body representing the old and the new.

“In the Bible, when peace comes, it says when the lion and lamb lie together, well that seems irrational because lions devour lambs and lambs run from lions they are opposites in their strengths, and here also you had extremes but because neither of them wanted the worst to happen ever again they found common ground.”

Rev Jackson, who also visited Oakgrove Integrated College in Derry, said that the students there represented the “moral high ground” that had been achieved through peace.

“Segregation is down, walls are down, and we can look back on the 50-year span of the civil rights movement here to see a level of progress that all involved should be proud.”

Earlier Rev Jackson viewed the exhibits from the civil rights movement on display in the museum, and toured the Bogside in the company of Paul Doherty, whose father was among the 14 people killed on Bloody Sunday.

“It is good to see the struggle codified and turned into a landmark,” he said.

“I’m very impressed with the investment that’s been put into it and how it is now a frame of reference for the future.

“It’s a reminder of how we are at our worst, and how we can become at our best.

“When you look at Robben Island, which was a raw reminder of separation, it’s now a museum, and it makes me think that people are not going back to those times.

“There will be people who try and make gestures but it’s not going back.”

Rev Jackson praised the redevelopment of the former Ebrington army base, which is now a square hosting events and concerts and which now houses restaurants and a brewery.

“In the square you feel that sense of freedom, and you can look back at the darkest night and realise now that it was dawn rather than dusk.”

But Rev Jackson said that “democracy requires eternal vigilance,” citing the example of the effects of Donald Trump’s US presidency, which he described as a “counter-cultural revolution”.

“In America with the Trump vote one sees a lot of remorse from people because they didn’t vote last time.

“People are now saying things like because they didn’t vote or were indecisive it’s led to this level of nationalism and this attack on globalisation.

“We had slavery longer than we had freedom, so there are scars, and you can see that here too.

“Brexit is an interesting challenge in that the people of Northern Ireland voted to stay in the European Union so they see the value of bridges, and they’re resisting a nationalist pride inside Britain – like in America – where there were those who sought secession and created a civil war to maintain secession and slavery, but it will not gain traction.

“Brexit tends to revive walls and revive fears, but what you find in the European Union is shared security, shared trade, more economic growth, and less fear.

“I think the general election result last week showed that Britain is a leader in Europe, not a secessionist.

“Britain’s strong enough to survive the first shock of Brexit but I think if the same vote was taken again it may not give the same result.”

Rev Jackson said he was “very proud” of the connection between the civil rights movement in the southern states of the United States and that in the North of Ireland, which, as explained in the museum, drew much of its influence from America’s example.

“It must not be forgotten just how turbulent and wrong things went on Bloody Sunday and during that time which led to that outburst of gunfire and death.

“We had the same thing in Selma, Alabama, when Governor Wallace unleashed the dogs and the horses on Bloody Sunday.

“The blood of that season fertilised a will to struggle, not the will to surrender, and we went from the blood of Selma to the White House in 50 years.

“Our best days were ahead of us.  Beyond the crucifixion, which is the blood, is the resurrection, and I think Ireland’s best days are ahead of it.”