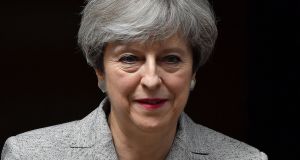 British prime minister Theresa May: meeting with Northern parties will try to advance the prospects of reinstating the Northern Executive and Assembly. Photograph: Leon Neal/Getty Images

British prime minister Theresa May will meet the five main Northern Ireland parties in Downing Street on Thursday to try to advance the prospects of reinstating the Northern Executive and Assembly.

Ahead of Ms May’s separate meetings with senior politicians from the DUP, Sinn Féin, the SDLP, the Ulster Unionist Party and Alliance the Northern Secretary James Brokenshire reiterated that the June 29th deadline for a deal remained firmly fixed.

“There is very little time left. An agreement to restore devolved power-sharing government in Stormont must be reached by the June 29th deadline,” added Mr Brokenshire, who also will be at the meeting.

Meanwhile, a new interim head of the Northern Ireland civil service has been appointed to allow the current chief Sir Malcolm McKibbin to continue play a leading role in chairing talks aimed at restoring the Northern Executive and Assembly.

David Sterling, current permanent secretary at the North’s Department of Finance, is taking over in a temporary role as civil service head, it was announced on Wednesday.

Sir Malcolm McKibbin was due to have already stood down as civil service head and a new chief appointed. The collapse of Stormont at the start of this year however prompted him to remain in post.

Sir Malcolm, who is standing down as civil service head at the end of this month, now will be able to concentrate his attentions on the talks.

The reappointed Northern Secretary James Brokenshire is the designated overall chairman of the talks.

Sir Malcolm, however, has been chairing a number of sessions. His continuation in this role could help circumvent Sinn Féin and SDLP demands that Mr Brokenshire should no longer chair the talks because the prospective deal between the DUP and the Conservatives would mean he could not be an “honest broker”.

“These are unique times for the Northern Ireland civil service as we continue to offer support to the parties and the two governments in the talks to restore the Executive,” said Sir Malcolm.

The post of new head of the civil service was advertised last October. But because of the continuing political deadlock it could not be filled. The job commands a salary ranging from £148,652 to £178,709.

“It will be for Ministers in an incoming administration to fill the post on a permanent basis,” said Sir Malcolm.

Another reason for Sir Malcolm staying in post beyond his retirement initially planned for earlier this year related to the Renewable Heat Incentive Scheme (RHI).

Both Mr Sterling and Andrew McCormick, permanent secretary at the Department of the Economy were the chief contenders for the post. They however were under scrutiny over their departments’ role in the botched cash for ash scheme that was introduced without any cap on the level of subsidies users could receive. This created the potential for an overspend of £490 million over 20 years.