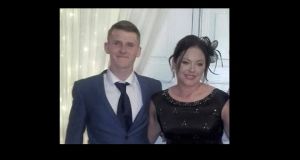 Joanne Kelly with her nephew David Kelly who was injured in a suspected hit and run incident.

A Limerick woman has described the “terrible shock” of finding her nephew lying in the middle of the road after being injured in a suspected hit-and-run incident.

Joanne Kelly (35) said she and a friend were driving home from a charity event when they made the discovery, which they initially believed was a calf that had been knocked down.

Garden centre worker and part-time barman David Kelly (21) was walking home after being out in Croom when the incident happened in the early hours of last Monday.

Mr Kelly sustained fractures to two vertebrae in his neck and a fractured wrist as well as a large wound to his head. He is due to be transferred to Beaumont Hospital in Dublin for surgery on his neck in the coming days, his aunt said.

“I jumped out of our car after I saw something on the side of the road, I thought it was a young calf that had been knocked down. I didn’t realise until I got closer that it was a person,” Ms Kelly said. “There was a lot of blood and I knew the person had obviously been hit by something.”

She said she bent down to provide assistance and realised it was her nephew.

“It was a terrible shock. I was horrified,” she said. “To find a person on the side of the road is shocking enough, but, when you release it is one of your own family, it’s worse again.”

Gardaí are investigating the matter and have been conducting house-to- house enquiries and examining CCTV footage.

Ms Kelly appealed to the driver who struck her nephew to come forward.

“How would they feel if it was their son left lying on the road... Please come forward and put our minds at rest, so that we know who did this,” she said.

Ms Kelly paid tribute to her friend, an emergency hospital nurse, who helped to keep Mr Kelly in a stable condition while they awaited the arrival of paramedics, who brought him to University Hospital Limerick.

“Every time I close my eyes I can see him lying in the middle of the road. That’s an image that will stay with me forever,” she added.

Anyone with information on the incident is asked to contact Newcastle West Garda station on (069) 20650.