Leo Varadkar has been elected as the new Taoiseach by the Dáil and has received his Seals of Office from President Higgins at Áras an Uachtaráin. Video: Kathleen Harris / Bryan O'Brien 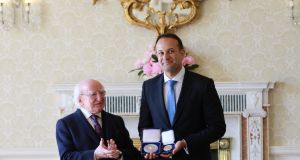 Leo Varadkar with President Michael D Higgins at Áras an Uachtaráin where he was appointed Taoiseach. Photograph: Nick Bradshaw. 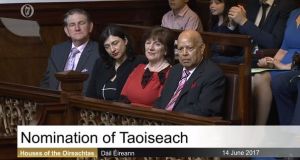 Members of Mr Varadkar’s family listen to proceedings in the Dáil on Wednesday. 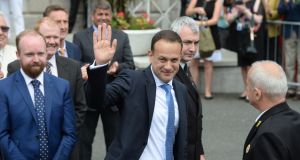 Leo Varadkar leaving the Dáil for Áras an Uachtaráin after he won a Dáil vote following his nomination as Taoiseach. Photograph: Alan Betson/The Irish Times.

Leo Varadkar has signed his warrant of office and assumed the role of Taoiseach. He is the youngest person to hold the office since the foundation of the State.

The 38-year-old Fine Gael leader was nominated for the role by his predecessor Enda Kenny and following a Dáil vote, he travelled to Áras an Uachtaráin where his appointment was confirmed by President Michael D Higgins.

In the Dáil, Mr Kenny said Mr Varadkar represented a “modern, diverse and inclusive Ireland’’ and spoke for it like no other. “It is an Ireland where each person can fulfil their potential and live their dreams,’’ he said.

Mr Kenny said having worked closely with Mr Varadkar throughout his political career, he was confident he would bring energy, integrity and skill to the role of Taoiseach.

His nomination was seconded by Fine Gael TD for Dublin Rathdown Josepha Madigan.

In the vote on his nomination, Mr Varadkar received 57 votes for to 50 votes against with 45 deputies abstaining.

Following the vote, Mr Varadkar told the Dáil he had been elected to lead but promised to serve.

“Leadership should never be just about one person and it is not just about setting a course for the future,’’ he said. “It is also about listening and in the months ahead I will seek to do exactly that.’’

He said he would later in the day speak to British prime minister Theresa May to pass on the Dáil’s sympathy on the London fire.

Mr Varadkar said he had no doubt that had it not been for Mr Kenny’s leadership he would neither be in the Dáil or Taoiseach. He said he took his seat for the first time on this date 10 years ago as did a lot of other TDs.

Earlier, Fianna Fáil leader Micheál Martin said even Mr Varadkar’s most ardent supporters had to strain themselves to claim he had more than a modest policy record as a minister.

“They ultimately had to resort to claiming for him policies which had clearly been initiated by others,’’ he added. “In fact, there was almost something indecent about the attempt to snatch credit from James Reilly for the few bright spots in his time as minister for health.’’

Mr Martin said it was certainly true Mr Varadkar’s views would be significantly more right-wing on most economic topics than the centre-ground consensus.

“In last year’s negotiations, his approach was very distinct from that of his colleagues,’’ Mr Martin added.

Mr Martin also said it was “a very special day” for Mr Varadkar.

Sinn Féin leader Gerry Adams challenged Mr Varadkar to adopt the approach of former Fianna Fáil taoiseach Albert Reynolds and to “do the right thing” on the North. Mr Adams also said he feared “Mr Varadkar will drag this Government to the right”.

He criticised his tenure as minister for health and noted his recent campaign against social welfare fraud.

However, he said: “I think he is a decent man. I wish him well.”

Mr Adams provoked sustained laughter when he said: “I do not know him well though he and I once attended the same pilates class...We couldn’t get the former taoiseach to stretch as far as that.”

Labour leader Brendan Howlin said it was a very proud day for Mr Varadkar personally, his partner Matthew, parents and all friends and family.

“For a gay man, for the son of a migrant, to be elected Taoiseach of this country is an important step,’’ he added.

Labour, he said, would continue to oppose Mr Varadkar’s Government, adding the programme for government and the confidence and supply agreement underpinning it were deeply flawed documents.

Solidarity TD Mick Barry referred to new entrants to the public service on lower pay and said he did not expect that Mr Varadkar as a new entry Taoiseach would take a new entry pay level.

Irish people had no respect for the “informer” and that was the “deplorable” approach incoming Mr Varadkar used in his social welfare fraud campaign, Independent TD Catherine Connolly said.

Green Party leader Eamon Ryan said the Dáil should be proud of the fact that not a single TD “plays that right-wing anti-immigrant” charge. He said, however, that despite Mr Varadkar’s fitness and “avocado mash, there’s not a scintilla of green in you”.

Members of Mr Varadkar’s family who sat in the distinguished visitors’ gallery included his parents Miriam and Ashok Varadkar, his sister Sophia, his partner Matthew Barrett, his aunt Cora and her husband Tommy, his uncle John Howell, his niece Suzanna and nephew Nicholas.

All members of the Cabinet were in the chamber with the exception of Minister for Children Katherine Zappone.

Seamus Mallon tributes: Sharon Stone among those to sign book of condolence 11:09
Man in his 40s dies in apartment fire in Cavan 09:16
Man (33) dies following suspected stabbing in Co Wexford 08:47
Funeral of Seamus Mallon to be held in Co Armagh on Monday 20:54
Irish explorer who discovered Antarctica honoured in home village 20:37
SUBSCRIBER ONLY