Flanagan and Coveney on the move with Murphy, Doherty and Ring new additions 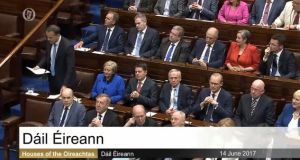 Taoiseach Leo Varadkar announcing his cabinet in the Dáil on Wednesday evening.

Mary Mitchell O’Connor was the only casualty in Leo Varadkar’s Cabinet reshuffle following his appointment as Taoiseach on Wednesday.

Eoghan Murphy, Regina Doherty and Michael Ring have been promoted to the senior ministerial ranks with Ms Mitchell O’Connor, who had been minister for enterprise, making way along with the outgoing Enda Kenny and Michael Noonan.

Charlie Flanagan moves from Foreign Affairs to Justice, in place of Frances Fitzgerald, with Simon Coveney replacing him in Iveagh House.

Mr Murphy, who played a central role in Mr Varadkar’s campaign for the Fine Gael leadership, is taking on the Housing brief previously held by Mr Coveney while Ms Fitzgerald will replace Ms Mitchell O’Connor, who drops to the rank of super-junior minister, in the Department of Enterprise.

Sources close to Mr Varadkar said Ms O’Connor made her dissatisfaction known. A number of Ministers of State including Seán Kyne and key backbenchers including John Paul Phelan were deeply disappointed at the reshuffle.

Ms Doherty is taking over Mr Varadkar’s old role as Minister for Social Protection while Mr Ring is now Minister for Community and Rural Affairs. Both deputies supported Mr Varadkar in the leadership race.

Paschal Donohoe will take on responsibility for the Department of Finance in addition to Public Expenditure and Reform.

Donegal TD Joe McHugh was promoted to Government chief whip and Minister for Gaeltacht Affairs. Wexford TD Paul Kehoe remains at the Cabinet table securing his super junior role with responsibility for defence in addition to the office for emergency planning.

Mr Varadkar, the youngest person to hold the office of Taoiseach since the foundation of the State, has presented his new team in the Dáil this evening.

He said the Minister for Health will be tasked with bringing forward legislation to allow for a referendum to repeal the eighth amendment to the constitution, which guarantees the unborn an equal right to life to the mother.

Mr Varadkar told the House he wanted to send a message that Ireland will be at the heart of Europe. He has directed Mr Coveney to handle Brexit matters and restoring the power-sharing Assembly in Northern Ireland.

He said Ms Fitzgerald will remain as Tánaiste but will be given additional powers including chairing Cabinet committees and attending State events.

Mr Varadkar was nominated for the role of Taoiseach earlier by his predecessor Mr Kenny and following a Dáil vote, he travelled to Áras an Uachtaráin where his appointment was confirmed by President Michael D Higgins.

He then returned to Leinster House to finalise his senior ministerial team who travel to the Áras on Wednesday night to receive their seals of office before a first Cabinet meeting takes place.

Senior counsel Seamus Woulfe was announced as the new Attorney General following the departure of Máire Whelan, who is taking up a position on the Court of Appeal.

The Cabinet announcement was delayed twice as Mr Varadkar is understood to have spent considerable time with each Minister.

The Taoiseach will appoint Ministers of State next Tuesday and told the parliamentary party meeting on Tuesday geography and areas where a second seat is vulnerable will play a role in his selection.