Is this the final Brexit straw? Lyons Tea may disappear with no deal

Taoiseach says ‘not all of the same brands’ will stay in shops - but which ones will go? 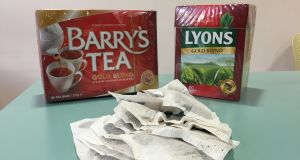 “There will still be plenty of food on shelves but perhaps not all of the same brands,” the Taoiseach Leo Varadkar said on Thursday night at a British Irish Chamber of Commerce event .

He said that Irish shoppers would have to to make some adjustments in their shopping basket in the event of a hard-Brexit - but what does that mean? What products can we expect to see disappear from our shelves.

Will we be able to drink the same tea and eat the same biscuits?

It is hard to say for sure exactly what will happen as retailers and manufacturers are keeping their contingency plans a closely guarded secret. However those that have spoke about it have assured shoppers that everything will be fine.

What we do know is that Irish supermarkets are vulnerable to change. That has rarely been clearer than it was when a few days of snow brought by the Beast from the East two years ago led to immediate and unprecedented disruption.

There were yawning gaps on Irish supermarket shelves as a chronic lack of resilience across the supply chain became impossible to ignore.

With a no-deal Brexit looking increasingly likely, supply chains could face considerably more disruption than was caused by the snow and that could see many lines of fruit and vegetables, dairy products and products with a longer shelf life that currently come from the UK hit with delays.

More than €4 billion worth of British food and drink is consumed in the Republic each year and this country is the UK’s main export market for groceries. In a no-deal scenario, prices will climb and products commonly found on our shelves could disappear entirely, at least for a spell.

According to a report published by the Economic and Social Research Institute a no-deal Brexit could cost each Irish household an average of €1,400 a year as prices rise.

The ESRI used a database of more than 4,500 products routinely imported from Britain and found that the price of bread and cereals in the Republic could rise by up to 30 per cent in a hard-Brexit scenario, while milk, cheese and egg prices could increase 46 per cent. A range of products - including meat, sugar, confectionery, coffee, tea and mineral water - are also likely to increase by 20-30 per cent.

But back to the original question? What products could be in shorter supply or gone completely if Boris gets his way?

In the Irish tea wars Lyons remains marginally ahead of Barry’s but while the latter is produced in Cork and will be protected from Brexit-Shock, the former is made in the UK and is owned by Unilever.

The beans, soups, sauces and salad creams made under this brand most likely come from the Kitt Green factory in Wigan. It has multiple product lines churning in excess of a billion different products out each year before shipping them around the world. Many of those products end up on trucks bound for Ireland.

Just two of the more popular soft drinks available in the Republic that are likely to be either in short supply or more expensive in a post -Brexit world, as both product lines are manufactured in a giant processing plant in England’s Forrest of Dean.

While the old-school treat is still named after the Rathfarnham farm where is was born, it too is owned by Unilever. It closed its Irish manufacturing plant almost 15 years ago and all the ice cream sold under this brand is, in fact, made in England.

It is the most popular soft-drink maker in Ireland and while it has a bottling plant in the Republic, it also has one in Northern Ireland so will have to figure out ways to ensure supply is unaffected with border-crossing difficulties on the cards.

This is by some measure Ireland’s most popular washing-up liquid but as it is made in England, if the worst fears are realised, it could be in shorter supply in the year ahead.

It is not just the chocolate digestives that will come under the Brexit cosh but all the biscuits in the range including Hob Nobs, Jaffa Cakes and Penguin bars.

They’re likely to be scarce too as Burton’s Biscuits, the company behind the beloved brand, has its main factory in south Wales.

The flow of the fastest growing tonic water in Ireland is likely to hit some class of dam as it is an English product and supply will either dry up or prices will jump by around 25 per cent.