Keep calm and stockpile: An Irish parcel for Brexit Britain

From Sudocrem to 7Up to Marian Keyes: the best of Ireland is going into our Bosca Brexit 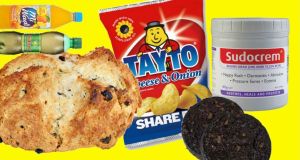 Bosca Brexit: the best of Ireland

The British government has revealed it is making plans to stockpile food and drugs in the event it crashes out of Brexit on March 29th without a deal, like a slightly chagrined drunk who ruins the party by throwing up over the sofa, and then slinks off home without a word.

It has been reported that the army and military helicopters may be called in to deliver food and supplies to far-flung parts of Britain (in this context, everywhere outside the southeast of England is “far-flung”). Generators could be flown home from Afghanistan in the event that electricity supplies between the Republic and Northern Ireland are cut off.

Prime minister Theresa May told people not to panic at the talk of stockpiling and blackouts – they should feel “comfort and reassurance”, she insisted. “It makes sense to put those things in place for no deal, because we’re in a negotiation,” she said. Quite right – who needs things such as water, fruit or lifesaving medicines when Britain is #takingcontrol?

Meanwhile, in better news, Jacob Rees-Mogg – the arch-Brexiteer who has just opened his second pension fund based in Ireland – said it will all be worth it… as quickly as around 50 years from now.

Over the weekend, as supermarkets warned that they won’t be responsible for stockpiling rations in the event of a no-deal Brexit, newspapers published advice for readers on how to put together a Brexit survival kit. “The imposition of tariffs and the likely collapse of sterling will mean that olive oil and wine will never again be as cheap. A middle-class way of life that began in the 1960s may be coming to an end,” wrote Ian Jack in the Guardian, suggesting people stock up on breakfast cereals, cat food, corned beef and HP sauce.

The Financial Times consoled its readers with the thought that advances in vacuum packaging means rationing can be a far jollier affair than it was in their grandparents’ day, urging them to fill their survival kits with “German wild boar salami … air-cured jamon from Spain and prosciutto from Italy … cheese from Franche-Comté or an Italian pecorino and gorgonzola.” There’ll be no undignified racing around Aldi to buy up all the cat food and the Italian pecorino.

In the grand tradition of the parcels that were sent home from Britain and America to Irish families in times of hardship, we’re compiling a survival kit for the Brexocalypse, using the best of Irish produce. A Bosca Brexit, if you will.

For inspiration, let’s turn to the “If crisis or war comes” leaflet delivered to 4.8 million Swedish households earlier this year. The leaflet advises people to stock nine litres of water per person, and includes a handy checklist of “non-perishable food that can be prepared quickly, requires little water or can be eaten without preparation”. Non-perishable, quick to prepare, no water required, can be eaten straight from the packet? Step forward, Tayto Cheese and Onion: your moment has come.

The leaflet urges the Swedes to line the shelves of their cellars with oat milk, tins of bolognese sauce, dried lentils, salmon balls and sardines. Listen, the Brexocalypse will be grim enough without living on oat milk in a bunker surrounded by the rank odour of salmon and sardine breath.

Our parcel will have more bunker-friendly alternatives including Flahavan’s oats; black pudding and rashers, which can last for a month in the freezer; several tins of Batchelors baked beans and Angel Delight, which could survive a nuclear winter unaltered. Our gorgonzola might not be as famous as France’s, but no-one can do highly processed red cheddar like we can, so we’d throw in a block or two of that too.

Hopefully, our neighbours in Britain will have taken note of the panic that ensued in Ireland during the big freeze when there wasn’t a slice of bread to be found; we’ll just have to see if like us they come to the realisation that they’d all been dossing off down the back the day they were supposed to be baking bread in home economics. The good news is that Irish soda bread is so simple even a total Boris could make it. We’ll pack some freezer-friendly flour, salt, bread soda, and buttermilk sour milk.

The Swedish survival guide also includes a recommendation to stockpile “rosehip soup”. Ireland doesn’t have a great tradition of making soup from things that grow in ditches, at least not since the famine. TK red lemonade might be a decent native alternative – being, well, red. Better still, Cidona is reddish, just as Irish, and has the advantage of being loosely based on a foodstuff occurring in nature. Further deep investigation – i.e. a 15-second Wikipedia search – reveals that rosehip soup is “extremely versatile” and can be used as “a drink, a soup, a dessert and a snack”. Clearly, the closest equivalent hardworking Irish foodstuff is Guinness, so we’ll send over a rake of cans.

The Financial Times is also urging its readers to stock up on fine continental wines. In the same spirit of generosity and comradeship, we’ll donate a few bottles of the often-overlooked and just as fine Irish equivalent: MiWadi. Also on the food front, we’ll chuck in a box of Tic Tacs – 45 per cent of the world’s total output of which are produced in Ireland – to help ward off nasties like bunker breath.

Lest we’re feeling smug about it all, Leo Varadkar has warned that Ireland will have to make its own arrangements to stockpile drugs. But none of us need to panic about assembling a first aid kit to cope with every eventuality – as any Irish mammy will attest, we just need to send over a few bottles of 7Up and a giant tub of Sudocrem, which lasts for at least 800 years, and cures everything that flat 7Up can’t, except maybe widespread post-colonial delusions.

As a gesture to our departing neighbours, we’ll even throw in 14.2 million iodine tablets (expiry date: 2005) for good measure. No, we’ve no idea what they’re for either.

British people will need something to read while they’re living it up in the bunker on Tayto, black pudding and soda bread sandwiches, washed down with Cidona.

For a little light reading, Enid Blyton’s Five on Brexit Island and Five Escape Brexit Island are probably more authoritative guides to the abyss they’re facing into than anything they’ll get from the British government. We’ll also send them a laminated copy of everything Fintan O’Toole has written on Brexit, including his recent theory that the “British have watched too many episodes of Doctor Who and imagine themselves to be Time Lords, creatures from another planet who are not bound by the earthly laws of time.” Meanwhile, Marian Keyes’s The Break, a touching and hilarious account of navigating the end of a long, and often taken-for-granted, relationship, might make them feel less isolated in their grief and confusion during the early days of separation.

Since most Britons alive today will have to be cryogenically frozen if they’re to appreciate the full benefits of Brexit, according to the timetable suggested by Rees-Mogg, we’ll also post over a copy of Irish writer Mark O’Connell’s excellent To Be A Machine, which has the handy subtitle of “Adventures among cyborgs, utopians, hackers, and the futurists solving the modest problem of death”. Oh, and a handful of Irish passport application forms, in case they don’t actually fancy waiting that long.

Once Brexit happens, Leavers will have no-one to blame for their troubles but themselves. This might be a difficult adjustment. To help them transition, we’ll add to the stockpile large quantities of Brussels sprouts, which can be conveniently frozen after blanching. Thus, when – for example – an unpleasant digestive indiscretion occurs in the bunker, they can say “Sorry, it’s not me, it’s Brussels”, and experience a rush of nostalgia for the good old days.