Catholic politicians must defend life from ‘conception to death’ 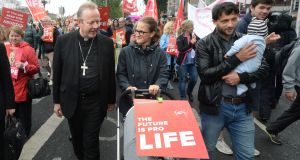 Archbishop of Armagh and Catholic Primate of All Ireland Eamon Martin with anti-abortion activists on a rally during the divisive abortion campaign. File Photograph: Dara MacDónaill/The Irish Times

Catholic politicians are obliged to oppose laws that violate the integrity of life “from conception to death”, Archbishop of Armagh and Catholic Primate of All Ireland Eamon Martin has said.

The Archbishop insisted they did not have the right to confuse “their personal opinion with a well-formed Christian conscience”.

Archbishop Martin was speaking in New Ross, Co Wexford, last night where he delivered the Edward M Kennedy Lecture at the Kennedy Summer School. “Catholic politicians, in particular, have an important but very challenging responsibility nowadays to support laws which uphold the dignity of every human person made in God’s image – even when this is not the popular opinion to hold.

“ I would say to them: laws and policies that fundamentally contradict the moral law, such as those that would violate the life and integrity of any person at any stage, from conception to death are fundamentally unjust and must be opposed. Not only on the grounds of faith, but also by virtue of right reason.

“People of faith must always be attentive to the danger of living parallel lives whereby they compartmentalise their existence into spiritual and secular spheres. Neither should they confuse their personal opinion with a well-formed Christian conscience.”

He suggested that “arguably President Kennedy’s 1960 speech on religion and politics [during the US presidential election campaign that year] contributed to the phenomenon of politicians professing personal adherence to Christian moral principles but holding that they could not give effect to them as legislators.

“Against this view, I contend that the truth is one and valid for all. Such fundamental values are not narrow Catholic pre-occupations but principles that redound to the good of every man and woman. The truth of the dignity of the human person and the fundamental right to life is discoverable by all people of goodwill.”

He continued: “Interestingly, in that same Houston speech, President Kennedy did raise the prospect of resigning in the event of his official duties conflicting with his conscience. This is a powerful reminder that a Christian’s foremost loyalty is to God.”

Welcoming Taoiseach Leo Varadkar’s call for a new relationship between church and State, Archbishop Martin said both sides are “autonomous and independent of each other”, but “would do well in these troubled times to dialogue and co-operate in the service of Ireland and the protection of humanity”.

Recently, he said, people had spoken to him “of politics descending into a dangerous factionalism and of a weakening of confidence in the integrity of parliamentary democracy”. It was “vitally important that church, civic society and government work together to preserve the fundamental concern for the common good”.

He added: “In an Ireland where rising individualism is often accompanied by growing disaffection and disillusionment with the leadership provided by both church leaders and public representatives, faith and politics need each other.

“The State will flourish if it is able to sustain itself as a ‘community of communities’.” It would struggle “if communities, like faith communities . . . find themselves unwelcome”.