British prime minister Boris Johnson has suggested that there could be regulatory alignment throughout the island of Ireland for sectors other than agri-food. 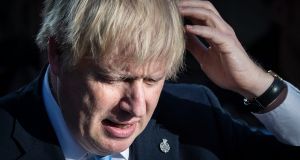 Boris Johnson has said there could be regulatory alignment throughout the island of Ireland for sectors other than agri-food but that the United Kingdom must have “democratic control” over such a regime.

Speaking at a police training academy in West Yorkshire, the UK prime minister quoted the late Ian Paisley’s remark during the 2001 foot-and-mouth crisis that his people were British but their cows were Irish.

“In that idea there is a germ of a solution to the question of frictionless cross-Border movement across the Northern Irish Border. We do want to minimise all theoretical checks as well as all practical checks. We think that all practical checks can of course be taken away from the Border. And the UK will not be instituting any Border checks of any kind in Northern Ireland,” he said.

“We also think there is scope for recognition of the practical reality on the ground in the agri-food sector in Northern Ireland. All that and indeed whether it could be extended to other sectors depends entirely on democratic control by the people of the United Kingdom.”

Mr Johnson told the House of Commons this week he would discuss with Taoiseach Leo Varadkar next week how the island of Ireland could remain a single regulatory area for agri-food. His suggestion on Thursday that the principle of regulatory divergence between Northern Ireland and the rest of the UK could be a first step towards British acceptance of a version of the Northern Ireland-only backstop originally proposed.

Mr Johnson has described the backstop as “anti-democratic”, and his demand for “democratic control” of a post-Brexit regulatory regime encompassing Northern Ireland reflects one of the DUP’s central objections to the backstop.

Mr Varadkar warned last night that some checks on goods and live animals entering the Republic are likely to be required “near the Border” in the event of a no-deal Brexit.

In his clearest assessment of the effects of a no-deal yet, Mr Varadkar listed a range of disruptions that will occur after October 31st if the UK leaves the EU without an agreement.

He also said he believes “there is a possibility we may have to live with no-deal for a period”.

Mr Varadkar told the annual dinner of the British-Irish Chamber of Commerce in Dublin last night that he does “not anticipate any significant change in medicine supplies. There will still be food on shelves but perhaps not all of the same brands.

“Flights, trains and buses will continue to operate normally for a period but an agreement will be needed for this to continue permanently,” he said. “EU vessels will no longer be allowed to fish in UK waters and vice versa, though the commission has proposed a short extension of the status quo.

“Tariffs will apply to goods imported into Ireland from the United Kingdom and vice versa ... This will be expensive and bureaucratic for business,” he said. “There will be checks on goods and live animals and, as far as possible, they will take place in ports, airports and at businesses. But some will take place near the Border. We are working out the details of this with the European Commission.”

4 Covid-19 vaccines Q&A: Why are targets being missed?