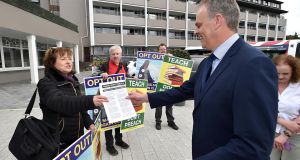 Pupils are being “forced” to study religion and schools are failing in their duty to allow young people opt out of the subject, Atheist Ireland has claimed.

Protesting at the Teachers’ Union of Ireland (TUI) conference in Killarney, Co Kerry, members of the group said the union had refused to implement a Department of Education directive to provide alternative subjects for students who opt out of religion.

Jane Donnelly, human rights officer with Atheist Ireland, said students who did not want to study religion were “forced to sit at the back of the class”.

She said the TUI members in Education and Training Board schools “had refused to even try to implement the department’s directive, citing resources and a lack of consultation”.

A TUI spokesman said resourcing was the only issue preventing the implementation of the department’s directive.

“Under the department’s circular, subject options would have to be made available to students at the time that religious instruction takes place,” he said.

“Clearly, this would have required the employment of additional teachers in schools but, remarkably, the Minister made clear that the required resources would not be provided.

“To suggest that the TUI’s position was related to anything other than serious and justified concerns about the absence of required resources – at a time when schools are already experiencing a recruitment and retention crisis – is at best grossly misinformed,” he said.