Services for families of disabled children ‘like Third World’ 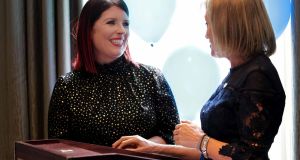 Brenda O’Connell-Barry and Mary Kennedy at the launch of this year’s Carer of the Year Awards. Photograph: Mark Stedman

Services for families with long-term care needs are “like something from the Third World”, a mother and carer of a severely disabled child has said.

Brenda O’Connell-Barry, from Co Cork, cares for her son Fionn (4) who has an extremely rare genetic mutation known as NACC1. The condition means he can be in pain, with seizures for days, where the sole focus of the person caring is to pacify and comfort him.

She was speaking at the announcement on Wednesday of the opening of nominations for this year’s Carer of the Year Awards which take place in November. Ms O’Connell-Barry received the award last year.

She and her husband, Trevor, found that with a regime of regular physiotherapy for Fionn the pain and seizures were controlled. “But we have to pay for that. It’s €75 per session, four times a week,” said Ms O’Connell-Barry.

“I have had to give up work – I was a playschool manager – to look after Fionn, so we fundraise to pay for his physio. We have to. There is no way any family could afford that, but Fionn needs it.”

“He goes to a beautiful school in Limerick. They have 72 kids and provide services to about 400 children in the Munster region, but they have one physio for just 2½ days a week. Since he started in September he hasn’t seen the physio. He’s had no speech and language therapy.

“Services in this country are like something from the Third World. It’s soul destroying. So when you see families fundraising for a disabled child, they really need all the help they can get.”

Last year’s young carer award recipient, Shauna Tighe (15) from Dublin, described the struggles of balancing school and friendships with helping care for her bother Daniel (12). He has a genetic condition called a Sotos syndrome which means he has an intellectual disability and has grown faster than usual for his age, making him very strong. He is also incontinent and visually impaired.

“It is really hard because I have a long day in school and then I have homework, my dad is in work all day and I feel bad if I leave my mam on her own with him. I do my best...my brother is very hard on my mam... But he’s still my brother at the end of the day,” said Shauna.

The awards, which have been run for more than a decade by Family Carers Ireland, recognise the “unpaid labour of love” provided by carers and highlight shortcomings in State services for affected families, spokeswoman Catherine Cox said.

“The State saves €10 billion a year due to the work of family carers,” she added.

Broadcaster Mary Kennedy, who each year co-hosts the awards with broadcaster Marty Whelan, said the Irish are caring people and the care they provided came from love. “But it is important that love is not abused by the State,” she added.

Closing date for receipt of Carer of the Year nominations is September 27th 2019 at Familycarers.ie