Irish Rail have released CCTV of an incident on Dublin's Amiens Street. A truck carrying heavy machinery hit the underside of a bridge, causing a JCB to fall into the street. Video: Irish Rail 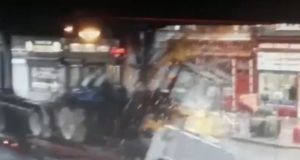 A lorry hit a railway bridge on Dublin’s Amiens Street, causing its load of a digger to fall into the oncoming lane

Irish Rail has made public CCTV footage of a lorry striking a railway bridge following an incident at lunchtime on Monday in Dublin.

All southbound services in and out of Connolly Station were suspended for a short time following the strike which occurred when a lorry carrying a mechanical digger struck the bridge at lunchtime on Monday.

The footage shows the lorry attempting to pass at speed under the bridge. The digger is dislodged from the lorry and falls into the lane of oncoming traffic.

Irish Rail posted the footage on its Twitter account and added: “Had pedestrians, cyclists or motorists been on the other side of the road, people could have been killed at Amiens St this lunchtime. Know your load height for the safety of all”.

Mr Kenny said such bridge strikes happen regularly. The same bridge was struck on Friday, March 15th, when a truck was wedged underneath.

That strike resulted in all services between Connolly Station and Pearse Station being closed for more than an hour, and the road was closed for three hours.

Mr Kenny said: “It is reckless for hauliers for driving without knowing their load heights and the clearance height of bridges. It is as basic a rule of the road as wearing a seatbelt.

“The consequences of this incident could have been catastrophic. It is a miracle there was no traffic coming in the opposite direction.”

He suggested that lorry drivers who do not pay attention to their load heights should face dismissal and criminal prosecution.