Northern Secretary does not have deep appreciation of Irish politics, says SF leader 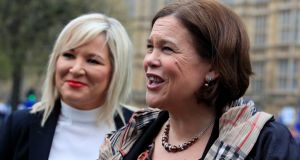 Northern Ireland Secretary Karen Bradley does not have a “deep appreciation” of Irish politics, the leader of Sinn Féin has claimed.

Party president Mary Lou McDonald made the comments as she accused the British cabinet minister of making “erroneous and dangerous” comments about voting rights in a potential Border poll.

Ms Bradley recently sparked controversy when she appeared to suggest that Irish citizens living in the UK could not vote in such a referendum, but the British government later moved to clarify her remarks.

Commenting on the confusion, Ms McDonald – on a visit to Westminster for Brexit talks – said: “Karen Bradley has proven not to have a very deep appreciation of Irish politics or the dynamic of Irish politics . . .

“I’m alarmed that as I speak to you now, more than 20 years after the signing of the Good Friday agreement, that the British government and state insists that Irish people living in the north of Ireland are British.

“And I am concerned that the Secretary of State would make such ill-judged and inaccurate comments around people’s right to vote in any potential unity referendum. That worries me and that does undermine public confidence in her.”

“The issue that we have here as regards this government’s stewardship of the peace process is far deeper and goes much wider than Karen Bradley.”

In her reply, Ms Bradley said: “The voting rights which will continue to be enjoyed by British and Irish citizens are reciprocal.

“British citizens may vote in local and parliamentary elections in Ireland but not presidential elections or referendums. This reciprocal right is reflected in the voting rights of Irish citizens living in the United Kingdom.”

The British government later said voter eligibility rules for referendums were determined on a poll by poll basis.

Irish citizens were able to vote in the 2016 EU referendum.

A British government spokesman said: “This issue is being distorted. Voting rights for Irish citizens in the UK are long established, going back decades.

“The UK government will remain completely consistent with the letter and spirit of the Belfast Agreement. To suggest otherwise is totally without any foundation and is something that the UK government refutes in the strongest terms.

“The Secretary of State will make this clear when she meets political representatives from Northern Ireland today.”

Sinn Féin vice-president Michelle O’Neill travelled to Westminster on Monday for talks with Ms Bradley, while Ms McDonald was due to meet Labour leader Jeremy Corbyn.

Ahead of the talks, Ms McDonald warned that a customs union does not “solve the problem for the north of Ireland”.

She said a customs union “probably makes sense for Britain” but said: “You need to be aware that membership of the customs union alone does not solve the problem for the north of Ireland – we need alignment also with the single market.

“These are the bare minimums that are required just to keep the lights on on our island. I think for our purposes we have to be clear that this Brexit saga cannot go on indefinitely — there actually has to be a conclusion, there has to be an end point.

“Whether there is a deal, and I hope there is, or no deal, I hope that that doesn’t come to pass, but irrespective of whether there’s a deal or no deal or an extension of any duration, we are very clear, and the British political system needs to be very clear, that the commitments made to Ireland must be honoured.”

The meetings were held amid fresh criticism of Mr Corbyn from prominent Brexiteer Mark Francois, a former Conservative shadow minister for Europe.

Branding the Labour leader a “committed Marxist, a lifelong CND supporter and a man who would quite willingly disarm this country of its defences”, he claimed Mr Corbyn was “taking advice on the negotiations from Sinn Féin/IRA”.

Mr Francois said he hoped that the EU27 leaders would “kick us out of the EU” on Wednesday by refusing to grant an extension to the Brexit process. – PA