Traveller and Roma graduates ‘disillusioned by lack of job opportunities’ 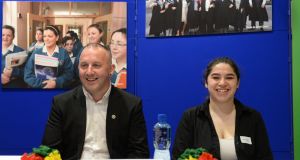 University graduates from the Traveller and Roma communities, who have overcome numerous barriers to reach third-level education, are becoming increasingly disillusioned by the lack of job prospects available, representatives have said.

Speaking at the International Traveller and Roma Day celebration in Dublin on Monday, Hughie Friel from the Donegal Travellers’ Project said younger members of the Roma and Traveller communities were at risk of losing confidence in the Irish education system due to the lack of opportunities available upon graduation.

Those who do graduate from third-level education tend to work for charities and ethnic minority support organisations because of the lack of doors open to them within other industries, Mr Friel said.

Graduates who secure employment in other areas feel the need to hide their identity from co-workers for fear of racism and discrimination, he added.

“The main employer of Travellers in this country are the Traveller organisations. People coming out of college are disillusioned – even with their qualifications there’s no employment. There is blatant racism in this country. Travellers are looking for support.”

Bianca Paun, a final-year law student from Maynooth University, spoke of the challenging journey she had undergone in progressing from second into third level education, and paid tribute to the school guidance counsellor who encouraged her to apply for Government funding.

“I come from a family of 14 and knew my parents couldn’t fund college. It’s been a journey. I have come out of my shell and the Bianca that started university is not the one standing here today,” she said.

“I firmly believe a good university education is a must in order to make a good living,” said Ms Paun.

“I know a lot of Romas drop out of school before Leaving Cert but that should not be the case. The Roma needs assessment found that only 6 per cent of households had a member with any third-level education. A push needs to happen so third-level education for Roma children becomes the norm.”

It’s important Travellers have positive visibility of their identity, history and culture

The lack of understanding of Roma and Traveller history was also flagged at Monday’s event as a barrier to inclusion within the Irish education system.

“It’s important Travellers have positive visibility of their identity, history and culture. There is a lack of positive reinforcement and visibility in the curriculum,” said Martin Collins, co-director of Pavee Point.

“It’s also important that we nail the stereotype that we have no ambition and that we’re not interested in education. Quite often the opportunity is not there. It’s blocked by racism and discriminatory practices.”

Garda Commissioner disputes claim of journalistic privilege 17:02
Face masks: All you need to know about where, when and why you need one 16:29
Adrian Donohoe murder accused says he cannot place raiders’ accents 16:26
EU taxation to change, but must be ‘as fair as possible for Ireland’ – Donohoe 16:11
Unemployed and unskilled workers most likely to be admitted to psychiatric care 16:08

1 Coronavirus: Unwinding of latest stage of roadmap ‘could be pushed back further’
2 Face masks: All you need to know about where, when and why you need one
3 UK accuses Russia of election interference and trying to steal Covid-19 vaccine
4 Coronavirus in Ireland: Further reopening delayed amid 'worrying' rise in infection rates
5 Like ‘a grandfather at the sherry cabinet’: Trump’s meandering monologue
Real news has value SUBSCRIBE