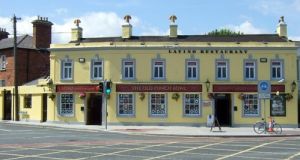 A closure order was served on part of the Old Punch Bowl pub after rodent droppings were found in a food store adjacent to the kitchen.

Restaurants in the leafy south Dublin suburbs of Monkstown and Booterstown and in the north inner city were among six issued with closure orders after falling foul of food safety inspectors last month.

Evidence of rats in kitchens, cooked and raw foods being stored side by side and inadequate or non-existent hand washing facilities were some of the reasons cited by the Food Safety Authority of Ireland (FSAI) as it released the latest details of Closure Orders for breaches of food safety legislation.

Closure Orders were served on a portion of the Old Punch Bowl pub on the Rock Road in Booterstown and on Victoria Asian Cuisine on the Crescent, in Monkstown.

The Taka Ra restaurant on Abbey Street Upper in Dublin 1, Cuppa City Coffee on Roger Casement Square in Cobh, a kitchen area serving Xian Street Food on Galway’s Quay Street and the manufacturing unit of the Gourmet Tart Company in the Ballybane Industrial Estate on the Tuam Road Galway were also served with closure orders.

“The most common non-compliances identified in Irish food businesses during March were a significant lack of pest control, coupled with filthy conditions,” said the FSAI’s chief executive Dr Pamela Byrne.

“It is alarming to see consistent reporting of rodent activity noted in food businesses. Rodents harbour bacteria and spread harmful pathogens, contaminating food and surfaces. Food inspectors continue to encounter cases where consumers’ health is put at risk through a failure to comply with pest control and hygiene requirements, which is unacceptable.”

She said food businesses “run the risk of making their customers sick through exposing food to pests and ruining their reputation with consumers by neglecting basic food safety management and hygiene standards. Negligent practices will not be tolerated,” she concluded.

The report on Taka Ra said the restaurant had “failed to implement adequate procedures to control pests” and an inspector who visited the premises said there was “substantial evidence that rats are active in the rear area used for washing equipment, preparing sushi rice and preparing ingredients for soup.”

“Fresh looking rat droppings” were seen in several locations and the report added staff suspected there was an issue “spilled food and water that may provide a source of sustenance to the rats had not been removed and there had been no adequate arrangements made for an emergency visit from a pest control technician”.

The report into the practises at the Victoria Asian Cuisine Restaurant at the Crescent, Monkstown in Co Dublin said it “was maintained in a very dirty condition” and it noted “a significant build-up of dirt and grease on surfaces and equipment throughout.

“Cleaning equipment was also filthy. Congealed grease was noted on surfaces and equipment in the kitchen. There were inadequate cleaning agents available to properly sanitise surfaces in the premises which presented an unacceptable risk of contamination.”

It concluded by saying there was “a clear lack of understanding of basic food hygiene rules was evident, particularly in relation to the risks associated with cross contamination”.

A large amount of rodent droppings were scattered on the floor of the dry goods store directly adjacent to the kitchen in the Old Punch Bowl in Booterstown and adequate “measures have not been taken to control pests on the premises.

Adequate measures have not been taken to thoroughly clean and disinfect surfaces where rodent activity was noted. The closure order relates to kitchen and food storage area on first floor only, bars not affected.

According to the inspector who served the order on the manufacturing unit of the Gourmet Tart Company in the Ballybane Industrial Estate on the Tuam Rd in Galway there was a “lack of adequate cleaning and disinfection in the premises and the food preparation activities evident gave rise to an unacceptable risk of cross-contamination of foodstuffs rendering unfit/unsafe food being placed on the market.”

Concern was expressed over the “preparation of raw foods and ready to eat foodstuffs using the same facilities, equipment and cleaning cloths without adequate cleaning and disinfection was being carried out.

Large containers for mixing foodstuffs that food workers stated had been cleaned “did not appear clean or adequately disinfected. Some of these containers had a foul odour. A large number of wet and dirty clothes were noted throughout the premises”.

There was a lack of adequate disinfection due to the dish washer not reaching adequate temperatures to ensure disinfection and containers of food were stored directly on the floor throughout the premises which was in a greasy and dirty condition throughout.

It also said the premises in its current condition “is not adequately pest proofed and would allow entry of pests and thus allows an unacceptable risk for contamination of foodstuffs”.

A “large amount of rodent droppings” were noted near freezers in corridors in Cuppa City Coffee on Roger Casement Square, Cobh, Cork. The “corridor area links all areas of the premises from kitchen to the dining areas to service area”. The report also noted a “rodent ingress point in external wall area at floor area of the kitchen”.

The layout, design and size of the food preparation area in a kitchen serving Xian Street Food on Galway’s Quay St was described as “inadequate and gave rise to an unacceptable risk to food safety.”

A report said the “lack of adequate facilities and the food preparation activities evident at the premises gave rise to an unacceptable risk of cross-contamination of foodstuffs. Preparation of raw meat and poultry products was found to be taking place in direct proximity, using the same facilities as cooked meats and other foods which were also being prepared at the premises.