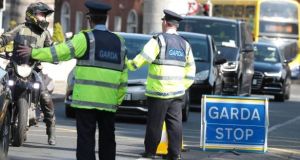 Data from Irish responses show trust in the Garda is very high, at 7.2, compared to a European average of 6.2. Photograph: Collins

Irish people’s trust in institutions during the Covid-19 crisis - most notably the healthcare system and the government - remains high when compared to the European average, new research shows.

However, European survey data also shows the employment impact of the crisis, with almost a third of Irish respondents saying they lost jobs or contracts, either temporarily or permanently, compared to an EU average of 28 per cent.

The statistics from Eurofound, the EU employment and working conditions agency, shows that trust in the Garda, the healthcare system, the government, the European Union and the news media is ahead of the EU27 average.

This is despite Europeans in general reporting “dramatic fall in trust in the EU and their national governments, with low levels reported across many countries”.

The data was gathered from 85,000 people during April. With 8,700 respondents, Ireland was the most responsive country to the EU-wide survey. The responses suggest that trust in the Irish government is among the highest in the EU, rated at 6.3 on a scale of 1-10, compared with a European average of 4.8.

Trust in the European Union itself remains strong, at 6.0 versus an average of 4.6. Only Finland had higher trust in the EU. Data from Irish responses also show trust in the Garda is very high, at 7.2, compared to a European average of 6.2. Trust in the news media was also higher than the average at 5.5 in Ireland versus 4.6 elsewhere in Europe.

The findings buck a series of trends evident elsewhere in the survey, according to Eurofound. “The first results show a Europe grappling to respond to the crisis caused by the Covid-19 pandemic, with many respondents reporting high levels of loneliness coupled with low levels of optimism about their future.”

Younger people were also more likely to report feeling tense “all or most of the time”, with the figure for younger cohorts 20 per cent, significantly higher than the overall population at 13 per cent, and higher than the EU average of 18 per cent.

Almost half reported that their working hours had decreased. Women were more likely to have had their working hours increase than men, while 15 per cent of those in work said it is either “very likely” or “rather likely” that they would lose their jobs. Work-life balance among Irish respondents was reported to be somewhat better than the EU average.

However, Irish women reported being too tired after work to do necessary household jobs at a higher rate than men, and also found it difficult to concentrate on their job or give it more time. “Working from home with children present may account for at least some of the gender differences, with women on average continuing to do more housework and childcare,” Eurofound suggested.

A higher level of teleworking was reported by Irish workers, at 43 per cent compared to an EU average of 37 per cent.

The impact of Covid-19 on personal finances is also becoming clear, with 16 per cent of respondents reporting difficulties in making ends meet. However, this is lower than the EU average of 23 per cent. Irish savings are in a worse state than the European average, with 22 per cent of Irish respondents stating they have no savings at all. Around one third (35 per cent) said their savings could keep the household going for up to three months, and 11 per cent stated they could afford to live off savings for a year or more, less than the EU average of 14 per cent.

People over 50 or over were most likely to have savings, while 30 per cent of people aged 35-49 had no savings at all. Accommodation insecurity and mortgage arrears in Ireland were similar to average EU levels in the survey.

1 Minister for Agriculture Barry Cowen sacked by Taoiseach
2 Miriam Lord: Martin blooded as Taoiseach after wielding axe on Cowen
3 Gardaí found naked man on a cross being whipped in Dublin club, court told
4 Coronavirus: Pub reopenings in danger as NPHET expresses serious concerns at case growth
5 Micheál Martin brings to an end one of the shortest ministries in history of State
Real news has value SUBSCRIBE