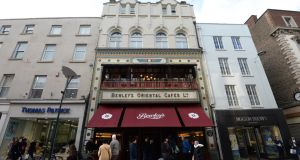 Bewley’s Cafe on Grafton Street in Dublin. Staff at the cafe have been told it will close permanently. Photograph: Dara Mac Dónaill

The operator of Bewley’s cafe on Grafton Street decided to close the historic cafe after concluding that sales could be hit by 40-80 per cent under Covid-19 social distancing rules that will be enforced once restrictions for the sector are lifted on June 29th.

The cafe had annual sales of €4.5 million in 2019 and made a loss of about €1.5 million, the annual rent it pays to its landlord, RGRE Grafton Limited, which is controlled by property developer Johnny Ronan.

The rent last year amounted to about one-third of the cafe’s turnover, a percentage that would have risen sharply with the decline in income. On reopening, the cafe would have been required to mothball many of its tables, to operate a one-way system for customer flow and to implement a number of increased hygiene measures to comply with social distancing restrictions that will be in place.

In addition, consumer demand would be lower, with overseas tourists, who make up a large portion of its customer base, set to be absent for the rest of this year and potentially for 2021, too.

In a note to staff, the cafe’s managing director, Cól Campbell, a son of artist Paddy Campbell, who owns the Bewley’s business, said the company had identified potential savings in overheads, including commercial rates charges resulting from recent supports introduced by the Government.

“Taking into consideration all of the information currently available to us, there is a real likelihood that the cafe will generate substantial and unsustainable losses into the future, and we need to take urgent steps to address that situation,” he said.

Mr Campbell’s note cited its €1.5 million annual rent, adding that a request for a reduction was not “ forthcoming”.

He said the company withheld rent for the April to June period on the basis that the cafe would be closed, with no trading income. “We have since received a 21-day statutory demand from the landlord threatening to wind up the cafe company due to non-payment of rent,” he added.

The Campbell family rescued the Bewley’s group in 1987 and oversaw a €12 million refurbishment of the cafe in 2017.

The cafe’s last day of trading was March 16th with the company now planning to enter into a statutory consultation process with staff on the redundancies.

In a statement on Wednesday night, the Ronan Group said: “We are saddened and surprised by the news that the iconic Bewley’s Café on Grafton Street is to close, especially as we had attempted to engage with the Campbell family over the past few weeks to reach a mutually acceptable outcome after the company had declared that it was taking a “rent holiday”. Our preferred solution has always been for Bewley’s, as a Dublin institution which belongs on Grafton Street, to re-open its doors as soon as it can.

“However, Ronan Group has made it clear to Bewley’s on numerous occasions that we were not in a position to subsidise its business when its shareholders are perfectly capable of doing so. Bewley’s is a successful and profitable company and has generated significant earnings for its shareholders over a period of many years.

“We call on the Campbell family to enter into meaningful dialogue with Ronan Group to see if this unfortunate outcome can be avoided.”

Bewley’s Oriental Cafes Ltd opened on Grafton Street in 1927 and is probably the best known coffee shop in Dublin, even though it has struggled to be profitable in recent times.

Its closure is a major blow to Dublin’s hospitality sector and throws into question the future use of the building, a protected structure.

In November 2019, Bewley’s chief executive, John Cahill, told The Irish Times that the losses at the Grafton Street cafe were due to its near €1.5 million rent, which he described as “excessive” and a legacy from the Celtic Tiger boom.

Post the 2008 financial crash, Bewley’s fought an unsuccessful campaign with Mr Ronan’s company to have its annual rent reduced to €728,000, a figure suggested by a third-party arbitrator in January 2012. Its lease is due to expire in 2022.

This was opposed by Mr Ronan’s company, which has a mortgage on the property. Mr Ronan’s business exited Nama five years ago with the backing of US group Colony Capital and UK-based M&G Investments.

The cafe has been subsidised in recent years by the wider Bewley’s group, which manufactures tea and coffee and has operations in Ireland, the UK and the United States and annual turnover of about €150 million.

At the end of 2018, the group had more than €6 million in cash on its balance sheet, a figure that is believed to have increased since then. However, with its main coffee distribution business now under pressure from a collapse in demand due to lockdown restrictions, the group needs to preserve its resources for whatever lies ahead, given that there is no vaccine for Covid-19.

The cafe has had a chequered history this century. It closed in 2004, reopening the following year after Bewley’s teamed up with entrepreneur Jay Bourke, who opened two restaurants, Café Bar Deli and Mackerel.

Those businesses closed post the crash, with the cafe reverting to the Bewley’s brand. It shut again in early 2016, reopening in November of the following year following the “head-to-toe” refurbishment.