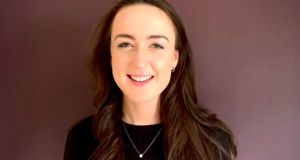 Emma O’Riordan: ‘I have mixed emotions - it would be difficult for me to say to you that I am totally comfortable.’ Photograph: Emma O’Riordan

It was, to paraphrase, Taoiseach Leo Varadkar, a graduation ceremony like no other but then for the 197 students graduating in medicine at UCC today, they are living in such unusual times that nothing should prove surprising.

For both Emma O’Riordan (24) from Blackrock and Patrick Hogan (23) from Douglas, the virtual graduation ceremony went surprisingly well with both highly appreciative of the fact that the Taoiseach addressed them by video link.

And after congratulating both Irish and foreign students on their graduation, Mr Varadkar, himself a medical doctor, pledged every medical graduate in Ireland this year would be offered an internship in the Irish health system.

The catch, if that’s the word, is that everyone coming into the Irish health system will be recruited to help combat the Covid-19 pandemic, which in addition to the population at large, has also hit health care professionals.

For Emma, whose father is a surgeon and whose mother is a GP, the challenge over the coming weeks and months as an intern is daunting and she candidly admits that she has mixed emotions about what lies ahead.

“I suppose for us as Irish students, we were kind of expected to get a job anyway but whereas the Taoiseach’s pledge has been a massive help is that a lot of our friends are from New Zealand, Canada, Australia and Malaysia.

“All these people wanted to stay in Ireland so the fact that the government has made more intern jobs available, they are now all staying which means we will have more doctors in the Irish health system which is good,” she said.

Ms O’Riordan said moving from academia to a front line hospital situation in the midst of the greatest health challenge facing the country in arguably 100 years is proving a daunting prospect.

“One the one hand for us as junior doctors starting out, it’s going to be quite nerve racking, we’re not going to know what to do, we obviously have seen Covid-19 and it’s quite new to us.

“But on the other hand it’s an incredible learning opportunity for us - we are going be thrown in at the deep end and we are going to learn so much in such a short space of time so it will be fantastic for us.

“As well as that, we have been supported so well by UCC Medical School and the staff at all the Cork hospitals so even though I feel a little bit nervous we know are going into an environment where people are going to look out for us.

“So we’re not terrified at the prospect - we’re looking forward to getting started because we are the same as everyone else sitting at home watching it on TV and wanting to help so it will be great to get started and give a hand.”

Nature of the times

For Patrick Hogan, both of whose parents are doctors working occupational health, the offer of an internship in the Irish system is again to be welcomed even though he expects it to be a baptism of fire in the fight against Covid-19.

“We are all incredibly excited to get going but at the same time there is a fear that you are entering the unknown and those stories of health care workers becoming ill and in some cases, dying is quite shocking.

“But at the same time, it’s almost what we signed up for in a way - there are going to be medical crises and epidemics where, at the end of the day, your job is to help people to stay healthy so this is just a part of that.

“I know I will take every precaution I can to stay healthy and we’ve had brilliant training over the years that will protect us and I have full faith in the HSE and the government they will protect us health care staff in every way they can.

But that’s the nature of the times we are in. It is a bit of a daunting call but we just have to have full faith in ourselves and what we can do and trust that we can contribute in whatever way we can.”